For Whom the Bell Tolls – Act III 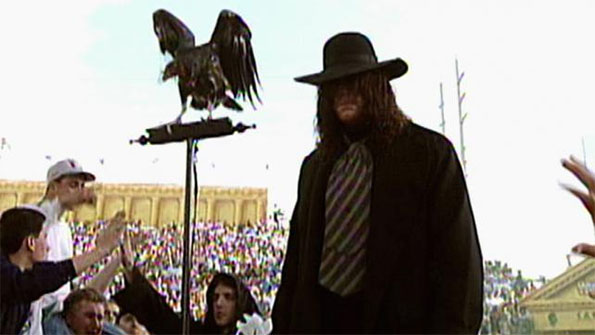 Today, we cover the only match to date The Undertaker has not won by pinfall, or submission. The great CM Punk once said to The Undertaker with flying urn in hand that when it comes to The Streak, if you are counted out or disqualified, it is still a loss. At Wrestlemania IX, The Undertaker would benefit from that idea and win for a third consecutive Wrestlemania by DQ against Giant Gonzalez. 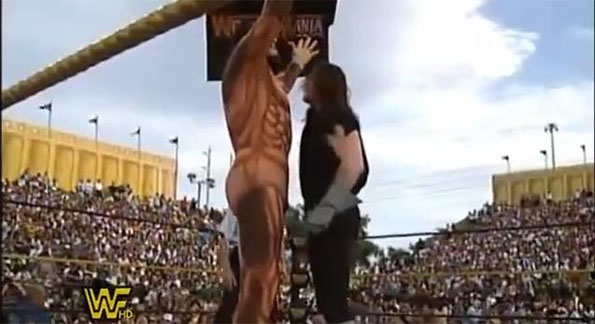 Today, The Undertaker faces Giant Gonzalez. The man who was billed by Howard Finkel at Caesar’s Palace to be eight feet tall. I looked it up, and in reality he was six inches shorter than that, but look above. When a man towers over The Undertaker standing at six feet and ten inches tall, it is appropriate to bill the match as the Giant against the Deadman. It is an interesting story to tell so early into The Streak because we’ve seen The Undertaker squash Jimmy “Superfly” Snuka and Jake “The Snake” Roberts. At this point in The Streak and the overall career of The Undertaker, Giant Gonzalez may have been the only thing that could stop the unstoppable. This match is an interesting change of pace. So far we have seen Snuka conquered and we’ve seen Roberts be the first to attempt to conquer The Undertaker at Wrestlemania. Here at Wrestlemania IX, suddenly the roles are reversed. It is The Undertaker that needs to conquer and stop the immovable Giant Gonzalez. The shift in storytelling is interesting even if the match isn’t.

Giant Gonzalez enters standing very tall in the outdoor arena. The Undertaker once again follows the late great Paul Bearer, but this time with a vulture by his side. The bird of death glided down the ramp as The Deadman comes for the Giant. Gonzalez had manhandled The Undertaker which was a first and it included eliminating him from the 1993 Royal Rumble to catapult the feud. The feud would be about the morality of both characters. Could the giant be beaten, or could the Deadman be laid to rest? The match was big because someone could finally overpower The Undertaker.

The match would be completely about this idea. The ring bell would start the match and the two men would trade giant blows to one another. In the early going, Taker would have to stand on the ropes to wrap his hand around Gonzalez’s throat. For the first time at Wrestlemania, we would see The Undertaker perform old school. It would connect, but Gonzalez wouldn’t fall to the mat. The match would continue to be a series of punches and haymakers from both men until Gonzalez would ground The Undertaker with a reverse chinlock and would utilize the steel steps on the outside to hurt the Deadman. The end of the match would be the war of punches between both men, but the Undertaker has long been considered one of the best strikers in wrestling history and he would haymaker Giant Gonzalez to one knee. Gonzalez manager, Harvey Wippleman would throw a rag with apparent chloroform to Gonzalez and create enough of a distraction for Gonzalez to use it on The Undertaker. It would technically give The Undertaker the match victory, but in wrestling sometimes what happens outside the rules of the match matter more. 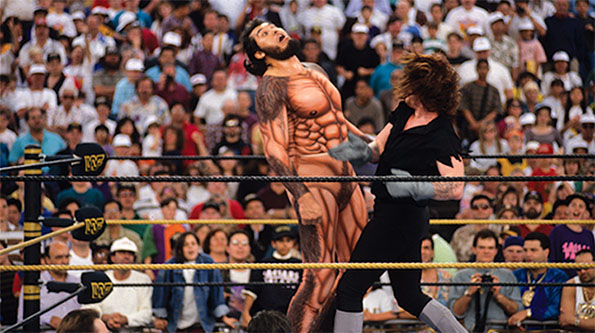 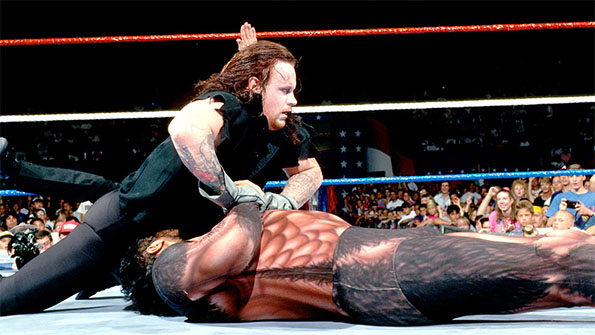 The match was slow, it wasn’t good, but in terms of story. I cared a lot when The Undertaker finally knocked Giant Gonzalez off his feet. It was a good moment and I think it was the first big moment of The Streak. I talked about how the tables had turned and it was The Undertaker who had to conquer another. It was interesting to watch because despite the fact that defeating a giant isn’t and wasn’t a new story at the time. It still manages to work when the pieces are done properly. It is tiresome from today’s perspective, but defeating a giant is still a big deal and still makes a wrestler look great. It may be an old story in the wrestling industry, but it is a goodie and it worked at Wrestlemania IX. A lot of wrestlers have proved over the years and even today specifically that if the crowd is at least absorbed into the story, or what you are doing. It doesn’t matter if the story has been done before, is simple or is done slowly. As long as it is done properly, the people will cheer like they did at Wrestlemania IX for The Undertaker.