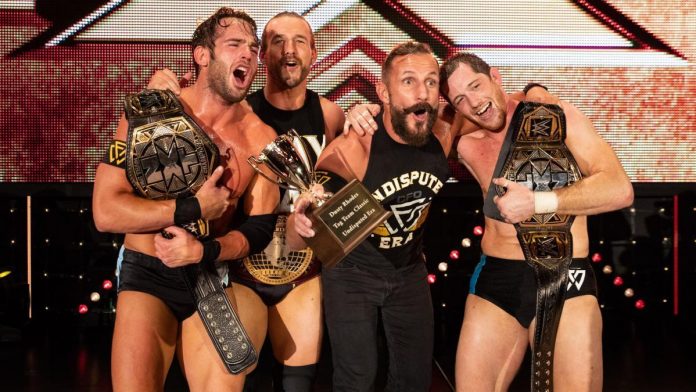 WWE NXT Champion Adam Cole recently spoke with SportBible and admitted that he did not foresee The Undisputed Era’s rise to the top. Cole now insists that the stable, which also features Roderick Strong and NXT Tag Team Champions Kyle O’Reilly & Bobby Fish, is one of the best in the company.

Cole was asked if he thought the stable would reach the height of success it has.

“So for me, no. I didn’t expect it,” Cole revealed. “I’m confident in myself and all of us. I’m very confident in our abilities. I know that if given the chance — like the chance that we have now — that we would succeed.

“But yes, if I’m being totally honest, I did not expect this to turn into one of the… seriously, the best factions in WWE. Like, as far as history, the support and how behind it [the fans are]… towards the beginning to look out in the crowd at a TakeOver and I feel like every other person has an Undisputed Era shirt on. I was like, ‘Woah, this is crazy.’ So, it’s been awesome.”

Fish was also interviewed and he said the success of the group could not be predicted.

“I don’t think this can be predicted. I don’t think you can set out to do… like, it has to happen organically,” Fish said. “There has to be an organic component, too, and things need to evolve. And this, from the inception, has evolved and turned into different things along the way. Like we talked about it before when there was three and then adding Roddy and Roddy was the only option for this and it caused us to evolve.

“And you don’t evolve when you’re just sitting in your comfort zone. So like if you plan it all, that doesn’t work. This can only come together when, like, there’s things thrown at you that are unexpected. You know, I didn’t expect to have ACL surgery, we didn’t expect for Roddy necessarily to come in when there was the three of us and then when that was presented it was like, ‘Well, yeah, of course! That’s the only option.’ And it’s just continued to evolve. If something doesn’t evolve, what happens? It dies. So, this continues to go strong. Why? Because there’s been a full evolution.”

O’Reilly said The Undisputed Era has worked so well because of each member seamlessly connecting on a personal level. O’Reilly commented on the respect & trust that they have for each other.

“But seriously, like Adam said that personal expectations, I guess, for ourselves… we know what we can do and we expect a lot out of ourselves, but together, it’s a little bit more unpredictable,” O’Reilly said. “But I think as organic as the fans took to us, we took to each other as a group just based off how long we’ve known each other and just, you know, we’ve seen each go through the best of times, the worst of times.

“And in every situation, there’s so much respect and trust that I really feel like that helps. If you look at any group, any faction in the history of professional wrestling that has been successful, there is that. There’s respect and extreme trust, and the rest handles itself.”

Strong echoed O’Reilly’s sentiments over the close relationship they all share, and believes the fans can see the “genuine camaraderie between” them. Strong claims that’s the reason the group works.

Going back to Cole, the leader of the group said their success extends beyond friendships or being a “solid pro wrestler” as The Undisputed Era is a “one-in-a-million scenario.”

“Again, it’s one thing to be really close friends, it’s another thing to individually be a really solid pro wrestler. But, like, this is a one-in-a-million scenario,” Cole said. “Just because all of us have strengths and our own weaknesses doesn’t mean that all thrown together that the group would work. But the group fits perfectly. Of all of the things that I’ve done, this has been the most natural — I don’t want to use the word easy — but fun. It’s been a blast.”