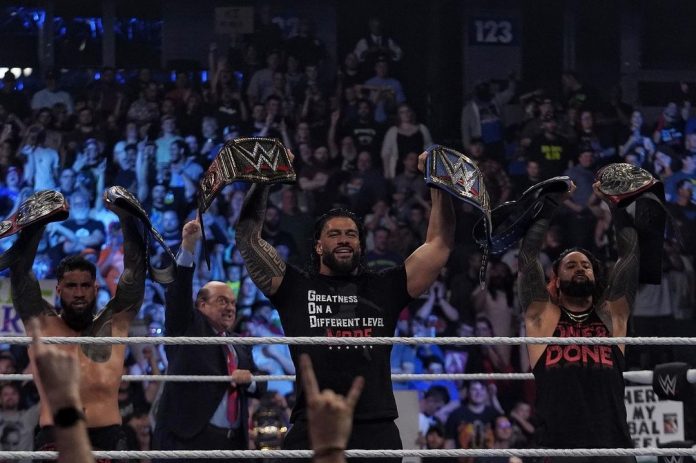 Jimmy and Jey Uso defeated Randy Orton and Riddle in the main event of this week’s edition of WWE SmackDown to become the Unified WWE Tag Team Champions. Undisputed WWE Universal Champion Roman Reigns interfered in the finish, assisting Jey Uso in taking out Riddle as they were fighting on the top turnbuckle. Paul Heyman had been on commentary and ended up getting involved.

This is the The Usos third time holding the red brand straps, and their first reign with the new Undisputed WWE Tag Team Titles. On July 18, 2021, Jey and Jimmy Uso defeated The Mysterios to win the SmackDown Tag Team Titles. Before the unification, their sixth reign with the blue brand titles lasted 306 days. Riddle and Randy Orton won the RAW Tag Team Championships on March 7 by defeating Kevin Owens and Seth Rollins, as well as former champions Alpha Academy, in a Triple Threat match. Their second reign as champions lasted 74 days according to records.

The Bloodline attacked Orton and Riddle at ringside after Friday night’s SmackDown title match. The Usos stomped on Orton with steel stairs, while Reigns choked Riddle with a Guillotine and put him on top of the announce table. Jey then climbed to the top turnbuckle and put Riddle through the announce table, Reigns also choked Orton out with the Guillotine. Officials and medics treated to RK-Bro at ringside as the Bloodline posed together in the ring, raising their championships in the air.

As PWMania.com previously reported, Reigns is planned to face Orton, Riddle and Drew McIntyre at the three big events this summer. You can click here for that report.

Stay tuned to more on The Bloodline, RK-Bro, and the new Undisputed WWE Tag Team Titles will be revealed soon. Highlights from Friday night’s main event at the Vandel Arena in Grand Rapids, Michigan can be seen below: