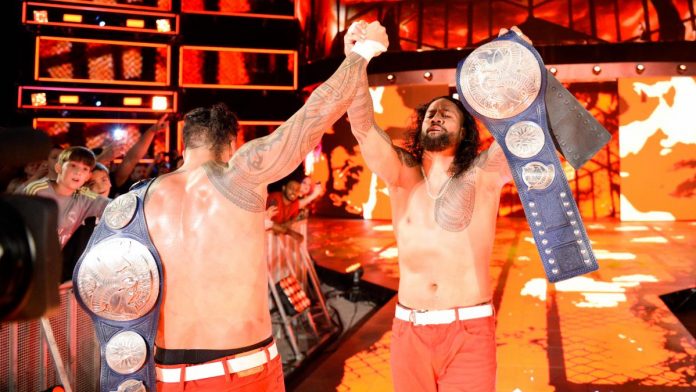 – Tonight’s WWE SmackDown episode saw the feud between Sin Cara and WWE United States Champion Baron Corbin continue. Corbin won their non-title match by disqualification after Cara would not stop beating him around the ringside area. Cara became enraged after Corbin wouldn’t stop trying to take his mask off. Cara has picked up two non-title wins over Corbin before this match – one by count out and the other by disqualification. Above is video from tonight’s match.

– It was announced on tonight’s show that #1 contenders Chad Gable and Shelton Benjamin will get their title shot from SmackDown Tag Team Champions The Usos on next Tuesday’s taped SmackDown from Manchester, England. The winner of the match will go on to face RAW Tag Team Champions Seth Rollins and Dean Ambrose at WWE Survivor Series. Tonight’s backstage segment between the two teams saw Gable break out in another rap, seen below in this GIF: