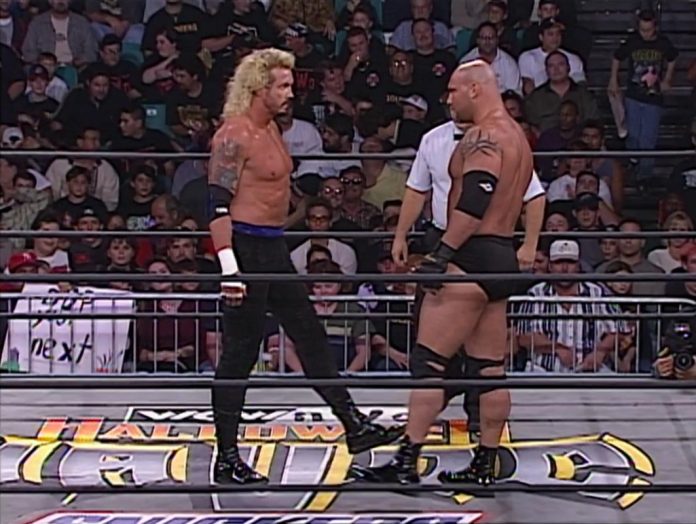 This month marks twenty years since the 1998 edition of World Championship Wrestling’s Halloween Havoc pay-per-view, an event that in retrospect, summarized many of the flaws and missed opportunities of the Turner organization during the boom period of the industry in the late 90s.

Aside from a solid Chris Jericho vs. Raven opener, the majority of this under card was less than memorable, including two Disco Inferno matches. With a dozen matches scheduled, (more of that later) many of this early bouts that didn’t offer much in terms of match quality or storyline seemed shoehorned onto the show. A side note about Raven, he doesn’t seem to really get the credit he deserves for the innovative career that he had, but at the same time, some of that might be his own fault because he clearly had another gear when he was motivated to put in the work. The Raven of 1998 still had very crisp ring work, and it was certainly a contrast to his lack of effort just a few years later.

As mentioned, the preliminary contests are more or less just randomly placed on the card so there’s not much to discuss about them, which is unusual because WCW was known for its stellar under card of talented younger athletes, but that wasn’t the case for Halloween Havoc in 1998. However, Bret Hart worked a match against Sting, which would’ve been considered a dream match in the right situation. An example of this would be the bout they had nearly a year later at WCW Mayhem in the semi-finals of the WCW World title tournament. But again, at the time of this Halloween Havoc contest, it was another example of how WCW didn’t use Bret in a more effective way. Up until that point, Bret was arguably as well-known for his tenure in the WWF as Sting was for his run in WCW, and with the same submission finisher, as well as their solid in-ring ability, this was a match that had the potential to be at the top of the card.

Unfortunately, the Havoc clash was a year after Bret’s initial jump to WCW and through lackluster booking, all the momentum he had after the Montreal incident was systematically halted through a series of decisions that minimized his name value. It creates some intriguing possibilities when you consider, what would’ve been possible if the company didn’t completely mismanage Bret Hart? Keep in mind, less than a year before this pay-per-view, the former WWF champion left Vince McMahon’s organization after one of the most controversial incidents in the history of the industry, and at that time, the general consensus was that Vince was wrong for his decision. Granted, in the two decades since, many people understand the chose that McMahon had to make, but in 1997, Hart was viewed as the workhorse of the company that got shunned on his exit. When Bret arrived on Nitro roughly a month later, WCW could’ve used his status as the “true WWF champion” to propel him into the hero role against the NWO in the main event picture in 1998. Remember, in November of 1997, the WWF was still on the ropes in the battle of the Monday Night Wars, and adding Bret Hart to the roster should’ve given WCW an edge the following year. Instead, Bret was portrayed as a secondary figure during most of his WCW run.

The infamous Hulk Hogan/Ultimate Warrior match has become known as one of the worst matches in the history of pay-per-view. While it was nice to see Warrior make peace with many of his former rivals when he was inducted into the Hall of Fame a few years ago, it’s well-known that for the majority of his in-ring career, he was very difficult to work with in nearly every promotion. Warrior’s original WWF run was just four and a half years, but his iconic presentation made him extremely popular, and he also made major cash so when he left amid controversy in 1992, he didn’t need to continue to wrestle since he was financially secure from his previous main event run. When the WWF was struggling in 1996 from the slump of the industry the previous few years and the pressure of the competition of Nitro that started in late 1995, Warrior was brought back for Wrestlemania 12 for a squash match with Triple H. Less than three months later, Warrior left again after he supposedly no-showed scheduled appearances.

Considering his track record, it’s puzzling why Eric Bischoff, the Vice President of WCW, even considered working with Warrior during a boom period when the company obviously didn’t need to sign another aging star to find star power. However, there was speculation that Hogan pushed for Warrior’s involvement so that Hulk could beat him to get a win since he had to put Warrior over at WM 6 nearly a decade prior. Sure, it sounds petty, but that’s not surprising with Hogan so it certainly seems possible. Bischoff got exactly what you could expect from Warrior, a series of bizarre promos and a few terrible matches. This bout summed up why the structure of World Championship Wrestling allowed politics to destroy the company. Hogan was at the top of the card and had creative control to make sure he stayed there. Instead of talent with potential getting the chance to work with Hogan, a feud from years earlier was recycled so that Hulk could get an ego boost. Perhaps, if WCW had a mindset to look beyond just a week-to-week rating, the company wouldn’t have imploded after original angles became stale. In fact, other than Goldberg and Diamond Dallas Page, what main event star were truly discovered after Hogan signed with WCW?

Speaking of Goldberg and DDP, their main event of Halloween Havoc became known for two things, most importantly, the show ran long and they paying audience didn’t get to watch it, and it was considered Goldberg’s best match for the Turner organization. Similar to how Hogan’s politics didn’t allow for new stars to work their way to the main event, the environment of WCW didn’t give Goldberg the chance to evolve as a performer. It was very rare that he was booked against an opponent that could provide depth to his matches.

Ultimately, those one-dimensional matches are why the fans started to reject Goldberg the following year and his run as a top star was relatively short in WCW. Still, the potential was there for him to be a major star on a long term basis if he was booked properly when he was at the peak of his career. His stellar run in WWE last year proved that if something is booked right, in terms of showcase the strengths and camouflage the weaknesses, it can be a successful.