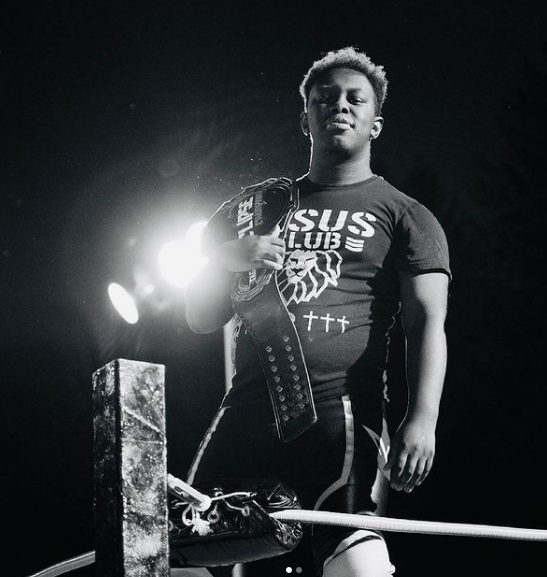 Note:Zeke Mercer uses They/Them pronouns so that preference will be used within this article.

That was the motivation for a 21-year-old professional wrestler to pursue this wild and over-the-top industry of professional wrestling. It might be poetic or dramatic to attempt to claim that Zeke always dreamed of being an in-ring grappler from as long they remembered, but it was more of a spur of the moment decision, an impulse decision that had led them down a very unique road the past few years.

Mercer, a lifelong athlete with training in martial arts and amateur wrestling in high school, always looked for a way to test themselves physically as well as mentally. Sure, Zeke had watched sports entertainment on television, but that was a spectacle that was done in the big arenas and major stages. It wasn’t until the native of Western, Pennsylvania stumbled upon the concept of independent wrestling, local cards around their region of the state, that they realized not only was there hometown wrestling, but it also provided a foot in the door into the business.

In mid-2017, an almost 18-year-old Mercer walked into a dingy and dusty building in a less-than-stellar part of town to inquire about training to become a pro, a nearly perfect blend of the combat sports they had experience in previously. Under the now-defunct Pro Wrestling Express banner, Zeke stepped into the ring for the first time to begin an entirely new adventure that would shape the next chapter of their life.

Zeke’s thoughts of their next adventure were hit with a harsh reality as soon as they hit the stiff canvas on their first day inside of an actual professional wrestling ring. They repeated the tedious process of learning to land on the mat safely, as well as diligent practice to learn the in-ring maneuvers of the genre. Indeed, Mercer’s previous sports background was handy and their natural athleticism allowed them to excel within the learning process of the training center. Zeke’s head trainer was Quinn Magnum, a longtime veteran that became instrumental behind-the-scenes in Pittsburgh wrestling for nearly two decades after series of injuries cut his own in-ring career short. One of the most respected in the area, Quinn now runs the Fight Underground organization and assists with other groups around the region. The 25-year veteran is no non-sense, but also very committed to the success of his students, particularly those that show a dedication to the sport.

“When it comes to my background in martial arts, after a while it all blends together, but it does all help with wrestling. It gives me an edge over certain opponents. I had good training under Quinn Magnum, but I can’t say it was easy. I can also say he has prepared me for the business of professional wrestling very well and I owe my success to his training,” Zeke explained.

When Mercer put on the tights and strapped on their boots for the first time in 2018 for their first pro bout, they were a ball of nervous energy, but excited to bound through the curtain to greet the rowdy fans in attendance. Observers, including their peers in the building that night, noticed immediately that Mercer possessed a natural poise inside the ropes. They looked like an ambitious youngster with skills, not a nervous rookie afraid of their own shadow under the ring lights. Zeke’s skills were noticed by others as well, and soon, they became a regular around the tri-state area, competing for an alphabet soup of promotions.

But, there are entire generations of former wrestling TV stars that have sadly shown that you can’t always bank all your chips on professional wrestling. In the wise words of Mick Foley’s New York Times #1 best-selling autobiography, Have A Nice Day, a publication that was originally released before Mercer was born, stay in school, and that’s exactly what Mercer did. Attending California University of Pennsylvania to major in Criminal Justice, Mercer had a completely unique balancing act for their new sports gig.

It wasn’t uncommon for Zeke to compete in a championship match Saturday night before they stopped off to grab some cheap gas station food and collapsed in their dorm room for the night. The next day, with their boots next to a book bag, Mercer would study for an upcoming test on Monday morning. Sometimes the studies were more exhausting than the in-ring competition. Already considered a natural by many, Zeke knew that the travels were a necessity to further hone their craft, and was another aspect of the adventure they looked for when they pursued the sport.


“Traveling to different parts of the country makes you realize how big the US actually is and how different the people are, but more importantly the wrestling. Not all places like the same style so traveling from the midwest to the south and even to the east coast has made me more adaptive to different styles of wrestling. Hopefully, that knowledge grows as I travel more and more over the years to come,” they remarked.

Just three and a half years into their career, Zeke’s pro career has taken him across Pennsylvania, into Ohio, and as far away as Detroit. Smaller in statue, but big in ability, they bring a unique combination of athleticism and technique for a well-rounded style that translates to various promotions. Aside from being based in Western Pennsylvania, working for a myriad of organizations there, Mercer also captured the Real Shoot Wrestling championship in West Virginia.

“Since my debut I’ve kept my head down and kept grinding and winning my first singles title was a great way to show the hard work I put into this. Especially since it’s the top title in a promotion full of hunger and talented wrestlers,” Mercer commented.

Still, the budding wrestling star stays grounded in their approach and expectations for a business that is often considered a shark tank. Despite audiences that cheer for their victories, t-shirt sells, and championship belts, Zeke Mercer keeps their adventures as a pro wrestling in prospective. Proper studies and the pursuit a criminal justice degree take priority, while a rather wholesome view point is used for sports entertainment, Zeke Mercer competes in the ring for the love of the game.

“I never expect to make money out of it or get super famous for it. I have gained some publicity from this but that’s just the by-product of having fun doing what I do. The main goal for me is to have fun and make memories, what more could you ask from that,” Mercer concluded.