ROH held their State of the Art event on Saturday night in Dallas, TX at the Gilley’s Dallas. At the show, Punishment Martinez captured the ROH World Television Championship by defeating Silas Young. 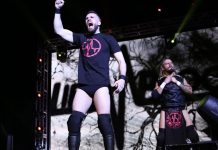