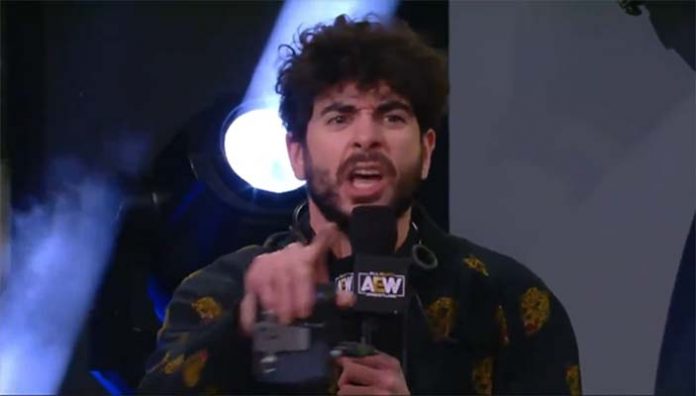 Tony Khan is pumped up for a big week for All Elite Wrestling that is full of company-firsts.

Things kick off on Wednesday night with the three-year anniversary episode of AEW Dynamite, which will be a special extended version of the weekly AEW on TBS television program.

On Friday things continue with the first-ever live two-hour edition of AEW Rampage. They wrap up the same day after the weekly AEW on TNT show with the fourth installment of the AEW Battle of the Belts series.

“[Two] more different people we could not be,” Khan began in a tweet, which started off as a reply to a fan who confused the AEW and ROH President with WWE executive Nick Khan.

From there, he continued his Twitter response with a final remark on the topic before switching focus to the aforementioned week-of-firsts for AEW.

“Here’s to not being two-faced,” he wrote. “Plus, here’s to a big week of AEW on TV, the AEW Dynamite 3 year anniversary Wednesday on TBS, our first XL 2 hour, 15 minute episode ever! [Plus this] Friday [will be] the first ever live two-hour AEW Rampage [and] Battle Of The Belts on TNT!”

Check out the actual tweet embedded below courtesy of the official Twitter feed of AEW and ROH President Tony Khan, and make sure to join us here at PWMania.com on Wednesday and Friday for live results coverage of all three aforementioned AEW programs.

2 more different people we could not be.

Here’s to not being two-faced + here’s to a big week of @AEWonTV, the #AEWDynamite 3 year anniversary Wednesday on TBS, our first XL 2 hour,15 minute episode ever!
+
Friday the first ever live 2 hour #AEWRampage/#BattleOfTheBelts on TNT! https://t.co/fMzV3DxIsq