Ring of Honor held the Supercard Of Honor PPV event on Friday, April 1st 2022 at the Curtis Culwell Center in Garland, TX. Former WWE star Killer Kross (Karrion Kross) was rumored for the show but did not appear.

While speaking to media after the show, ROH owner Tony Khan commented on Kross:

“Nothing was really booked until I took over. I think there was some stuff that had been announced but they had never been announced on the show. And given some of the stuff on the show I thought for example, and I really like him, I like Killer Kross a lot and Scarlett. I don’t think they were specifically locked into any matches but it is possible the prior management had talked to them, I think the prior management had talked to a lot of people.

I tried to stay true to the stories of Ring of Honor and I want to bring a new era of Ring of Honor and tried to feature a lot of the former names and names of the past and also debut some names for the first time, some wrestlers from AEW like Brian Cage, Swerve and others. It was very cool and there’s a lot of people who have a history in Ring of Honor and even recently who are in AEW. When I took over the booking, there had only been a few things announced and that wasn’t one of the things and there wasn’t a match locked in. Total respect to both of them and could’ve easily seen that fitting in too.” 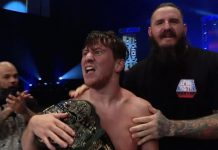 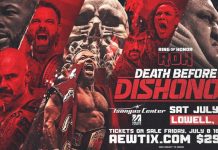