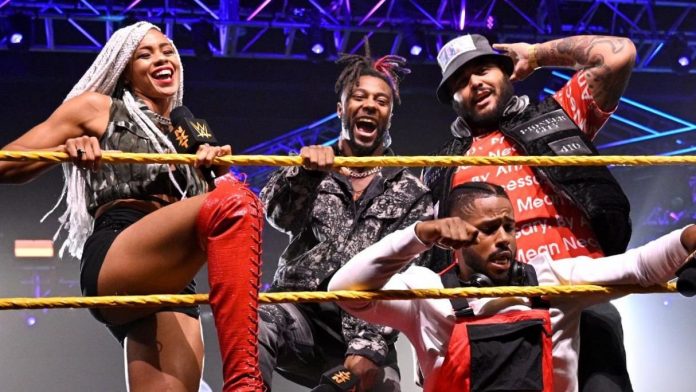 As we’ve noted, The Young Bucks and Top Dolla of Hit Row took a few jabs at each other via Twitter this week, specifically over who’s the more legitimate sneaker-head. Top Dolla trended all day on Twitter on Thursday, and The Bucks took credit for that.

In an update, Top Dolla took to Twitter today and released a diss track against The Bucks. It’s clear that the rap is aimed at the AEW stars because it was recorded over the beat to the “Let Me In” single released by rapper Young Buck on his 2004 album from G-Unit.

Dolla, who had a career in music long before he got into pro wrestling, usually releases freestyles on Friday mornings. Today’s song is titled “FRAN¢Style Friday 129 aka SNEAKER DI$$” in a reference to the sneaker-head beef with The Young Bucks on Twitter this week. He noted how he wrote, recorded and mixed the song by himself, and then shot and edited the video by himself, all in under 3 hours.

The Bucks have not responded to the diss track as of this writing.

You can hear the full song below, along with his follow-up tweet:

Wrote, Recorded, Mixed, Video Shot, Video Edited, ALL BY ME in under 3 hours.

🗣WHO HOTTA THAN TOO DOLLA? pic.twitter.com/e5Gk4S18r9