— Brutus “The Barber” Beefcake is struttin’ and cuttin’ his way into WWE immortality.

Triple H sent out a tweet congratulating Beefcake on entering the WWE Hall of Fame.

A legendary host, #SummerSlam main-eventer and now he’ll be struttin’ and cuttin’ his way into the #WWEHOF!
Congratulations to @brutusbeefcake_ on your induction! #WrestleMania pic.twitter.com/MCtDhCGlBK

Thank you Brother!!! I’m so excited for this weekend!

— Randy Orton celebrated his birthday on Monday as “The Viper” turned 39 years old.

On this day, #TheViper @randyorton was born.

— In the latest edition of Canvas 2 Canvas, Rob Schamberger goes to C2E2 in Chicago, Illinois to showcase all of his WWE artwork, and even gives a live demonstration of his process. In this presentation, he paints a portrait of Chyna. 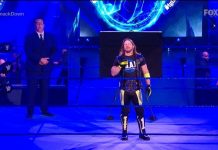