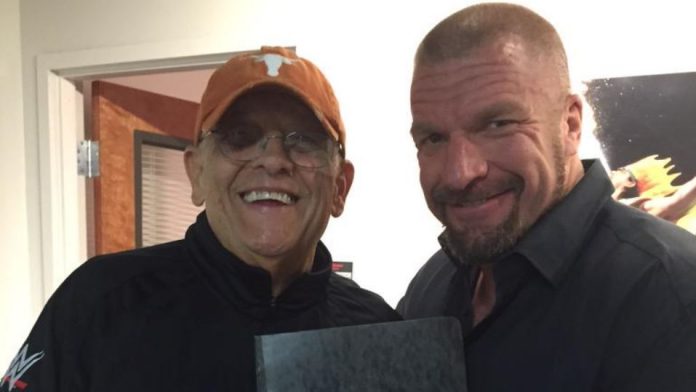 WWE Hall of Famer Dusty Rhodes continues to have a significant impact on the company today.

WWE Chief Content Officer Triple H recently spoke with The Ringer about WarGames, which will be available on the main roster at the WWE Survivor Series Premium Live Event in November. WarGames worked with Triple H in the early days of WWE NXT, and it was noted that WarGames is an important part of The Dream’s legacy as both a performer and a booker.

“When I was creating NXT and that system, he was my partner in a lot of ways. I’m a big fan of his work, his booking, his philosophy,” Triple H said. “You know, I often say I’m one of the luckiest people, because for almost 30 years, I got to sit under the Vince McMahon learning tree. And while I was almost doing a startup company, so to speak, with a very limited budget and everything else, I got to do that with Dusty. When we lost him, it was tragic, because he contributed so much to the business, and his ideas and his concepts and his business ideas are still floating around today. That should tell you something, because there’s very few people in this industry with that [influence].”

Triple H was asked if there is any advice from Dusty that he treasures. One of the most important lessons Rhodes taught him was to not hold himself to an unrealistic standard.

“When you’re first starting something, the successes stick with you, but the things that go wrong stick with you even more so,” Triple H said. “You’ll have something in mind, and in your mind, it’s gonna be great. And then you watch it come to life and you’re like, that was terrible, and you beat yourself up. And Dusty would always walk by me and he’d tap me on the shoulder. He’d say ‘Kid, remember what I said, if you get 70 percent of what you see in your head to come out on TV, that’s a grand slam.’ I keep that thought in my head all the time. It’s been a valuable lesson.”

Rhodes died at the age of 69 on June 11, 2015. Cody Rhodes returned to WWE earlier this year, revealing that he is the Executive Producer for WWE and A&E’s “Biography: WWE Legends” documentary on Dusty, which will air in the upcoming season.