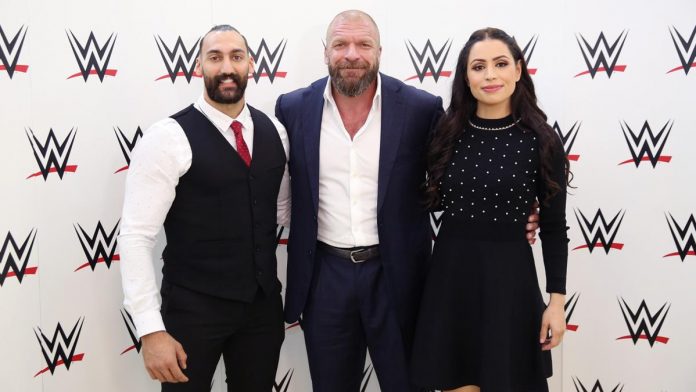 Before his match against Roman Reigns in Abu Dhabi, Triple H took part in another historic moment when he officially welcomed Nasser Alruwayeh, the first Kuwaiti man to sign a contract with WWE.

Triple H took the opportunity to also welcome Shadia Bseiso, who earlier this year became the first Arab woman from the Middle East to sign with WWE while making the news about Alruwayeh’s signing official on social media.

Another historic moment here in #WWEAbuDhabi as we welcome @shadiabseiso, the first woman from the Middle East and Nasser Alruwayeh the first Kuwaiti signee, to @WWE. @WWEmena pic.twitter.com/DnFbZlazQL

Both Alruwayeh and Bseiso impressed WWE coaches and training personnel during the company’s invitation-only tryout in Dubai last April. Bseiso’s contract signing was announced in October, while Alruwayeh made his contract signing official before WWE’s second live event in Abu Dhabi on Friday night.

In addition to conveying her gratitude to Triple H on Twitter, Bseiso expressed her excitement about starting her training at the WWE Performance Center in Orlando, Florida next month.