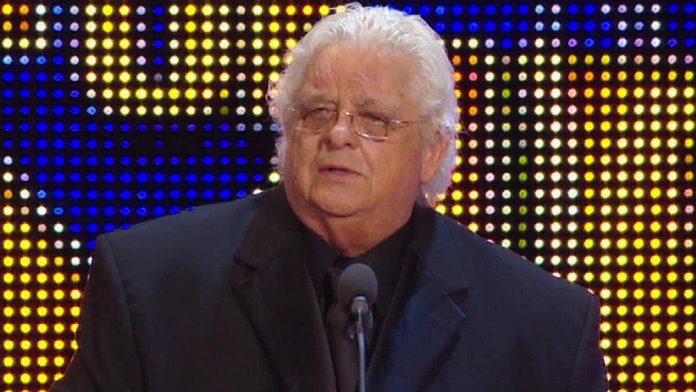 The Two Man Power Trip of Wrestling recently spoke with Four Horseman member, Tully Blanchard. In a brand new one hour interview Blanchard offers a unique perspective into the wars between both men and all of the tension and success they managed to create throughout the mid-1980s.

Tully Blanchard On The Crazy Amount Of Stipulation Matches He Had With Dusty Rhodes:

Looking back on two years since we lost Dusty Rhodes:

“I had seen Dusty at a number of legends shows and we talked in passing and didn’t really have an opportunity to have long conversations. I was flying to Charlotte to be apart of the fan-fest and when I landed and turned my phone on it just exploded of (news) of Dusty’s passing. When I saw Arn, I didn’t really know that Dusty was sick because the last time we spent anytime together was in 2012 at the Hall of Fame induction when he did such a great job of inducting the Four Horseman and it really just went kind of surreal. My Dad had passed in 2012 and there are so many ties between my Dad and Dusty that people may not know but I was still processing that and still am today and that has been five years and now with Dusty at two years, when you said that I just kind of had to take an extra breath and think, it has been two years already. Truly time keeps on going and it is just amazing how quickly time goes.”

“My Dad booked him in his very first main event. It was down in Harlingen, Texas. That was kind of a neat thing watching those two because I was in High School and just starting to hang around the dressing room a little bit. I believe it was a sell-out in a little building that they were in down in Harlingen and at Dusty’s very first main event pay-off I can remember my Dad giving him the envelope with the cash in it. There is a lot of history there.”

Convincing Dusty to book them together in a program to help build the Crockett territory:

“When Dusty first took the book and was the booker, he came in and went on television and was beating people in six seconds. I told him (I was the TV Champion at the time) that he and I need to go out on some of these shows and go twenty minuets and show the people that he can go for twenty minuets because they (the fans) don’t think that he can. That turned out to be money in the bank because that changed everybody’s image of him of being able to go and put the time in the ring.”

What brought their feud to the next level:

“At the start of 1985 we got Baby Doll and went forward with it and that was all Dusty. He wanted me to have a female manager and they were looking for Sunshine (who worked for Dallas) for quite awhile and they actually couldn’t find her. We were working during Christmas week for Eddie Graham and did some shots to help the territory down there and Nickla Roberts was wrestling on one of the cards and I told Dusty that she has got to be Baby Doll. In fact, he and I saw her and we went and had a meeting and nearly said it simultaneously. It was a huge boost to the territory, a huge boost to Nickla and certainly a huge boost to the Dusty Rhodes/ Tully Blanchard feud that was just getting started.”

Some of his personal favorite moments from their feud:

“Some of the great moments like when Dusty got Baby Doll for thirty days and putting her up in cage and all of the stadium matches where the money was hanging above the ring and there are so many of them I can barely remember all the different matches that we had during that time. When we switched Baby Doll baby face and I slapped her, Dusty came out and defended her honor. I just watched that recently on YouTube and one of my daughters asked if I really hit her and I did, I smacked her pretty hard. But that was the thing that was so big about what we did because what we did was believable and that is why people still remember it today.”

Trying to name some of the stipulation matches they had throughout the mid 1980s:

“We had a first blood match and that was at Starrcade 86. Then we had the phase of barbed-wire matches, which were friggin’ nuts. I don’t think we had a Starrcade match that was a barbed-wire match but I know we had a ladder match. We may have done a barbed-wire match in the summer time at the stadium in Charlotte.” “Everyone of those was great to be a part of and great to be part of wrestling history and I was a very fortunate man that Dusty had the confidence in me to be able to sell tickets working with him. That is when you know you’ve got to go and I ran with it.”

You can listen to the show below: