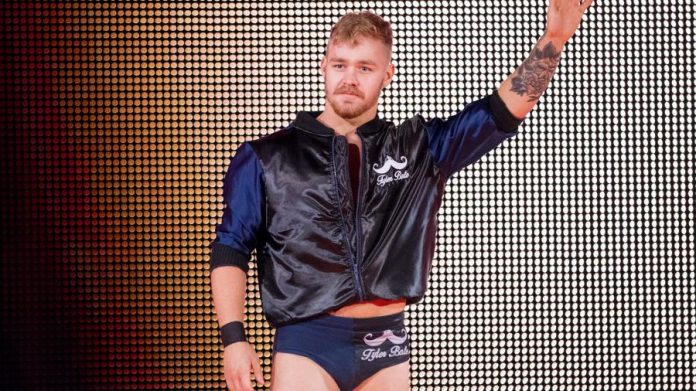 During a recent interview with The Mirror, Tyler Bate commented on his NXT UK Title loss and more. You can check out some highlights from the interview below:

On how he and his family doing in the pandemic: “Yeah, I feel really lucky to be on what I guess is the more privileged side of the economy, so I don’t have to struggle as much as I know a lot of other people are at the moment. Plus, I have a lot of ‘toys’ in my house to keep me busy, and to keep my mind and body active.”

On if the break has given him time to reflect on the past few years: “I guess, yeah. I’ve done a lot of reflecting two years, and more so looking towards the next few years. I have been thinking about all the fun, crazy stuff I’ve been able to do through wrestling. Having such a long period of downtime has allowed my brain to almost play catch-up, letting all of the memories and experiences settle in. Now, my mind is ready for a new bunch of craziness!”

On summing up his last few years: “It’s hard to sum up what It has been like in a few sentences. First and foremost, it has been very busy! Everybody is just running around. Before NXT UK and before we had a show, it was kind of just up in the air, and there was a bunch of UK [talent] bouncing around in NXT and in 205, then there would be a few odd bits on Raw and Smackdown, when they’d come to the UK. It was very random, so you can’t really plan your life very far ahead. The longest you can plan is maybe six weeks, because with WWE, things can change very fast. You have to be [available] on demand. But, for the most part, it has been fun, and I kind of like that entropic lifestyle. It’s a fun chaos.”

On how he visualizes his long-term career: “I love wrestling, and the one thing I’ve found I’ve been best at in life is being able to do this. For as long as it is fun to me, it doesn’t matter to me what my role is in wrestling, I just love being involved in making cool things happen, and being able to inspire good ideas to people, and use the fame I have as a good tool.”

On if he was disappointed to drop the UK Championship to Pete Dunne: “No, not at all. If you really care about winning and losing, then professional wrestling isn’t for you! You should probably go and be a mixed martial artist or something, where winning and losing actually matters. In what we do, it is about the bigger picture and the entertainment side of things. I understand, and I’ve seen people be very disheartened when it comes to losses, and for the most part that is just a very egotistical way of thinking. Professional wrestling isn’t about you, it’s about everybody.”

On if he’d prefer to switch to singles wrestling or continue tagging: “I think it depends on the time as to what my preference is. Having a lot of singles matches puts a lot of pressure on you and another person. As much as people say they don’t get nervous, they do. I feel as though I have a lot to live up to now, because I’ve been consistently having quite highly-regarded matches, I don’t want to let people down. It can be a bit stressful, and that’s when I quite like to do tag team wrestling, because it is a new project and something to sink my creative mind into. I don’t want people to get bored of me, because I get bored of me when I’m doing a lot of singles stuff!”

On the pressure of continually reinventing oneself: “Yeah, and it goes back to that end goal of being involved in something people care about. That’s why professional wrestling is so great. You can switch roles. You can go from being the guy who has the [great] matches to being, as ridiculous as it sounds, a manager. Then, you can play the tag-team wrestler role. There are so many different roles you can play, and that’s the key to maintaining your relevance; not just trying to constantly top the last thing. You have to weave in and out and play each role as best you can.”