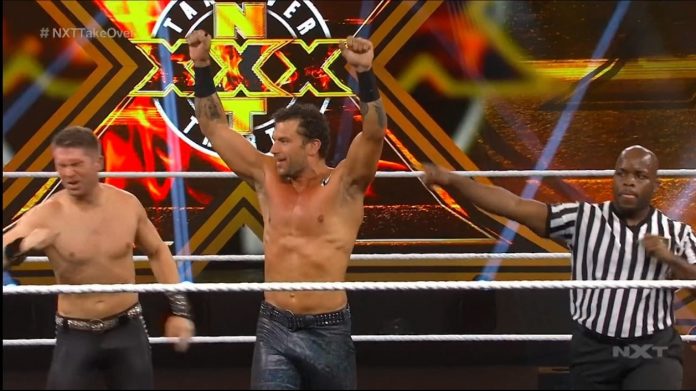 WWE NXT Tag Team Champion Tyler Breeze recently spoke with Phillip Martinez of Newsweek to promote tonight’s show on the USA Network, which will feature Breezango defending the titles against Marcel Barthel and Fabian Aichner of Imperium. Breeze first signed with WWE in 2010 and held the FCW Florida Heavyweight Title and the FCW Florida Tag Team Titles while in developmental, but this was his first title run in NXT or the main roster since being called up in October 2015. The title win over Imperium on the August 25 NXT episode marked the first big title run for Breeze in WWE. He was asked how it feels to finally hold gold.

“It’s kind of a foreign feeling for me,” Breeze said. “Like you said it’s been about 10 years now that I’ve been in WWE so the fact that we got to where all WWE superstars want to be has been worth it. If you’ve been a fan of mine for a long time, you’ve been watching, you know the stories, you know the ups and downs and you’ve watched as I’ve gone from NXT up to RAW, Smackdown back to NXT. Everybody’s been along for the ride so it’s kind of very cool where me and Dango have been a tag team for five years and to finally get to that point where we [won gold] and it’s cool because it doesn’t feel like it’s just us it feels like there’s a whole group of people that said, ‘Yes, they did.’ It seems a lot more like a group effort than just me and Dango so the fact that we’re finally here and we’re finally NXT champions is a very sweet feeling and it makes us excited to just do more and more and more.”

Breeze was also asked if he’d like to see all three tag team titles unified, so that one tag team could work RAW, SmackDown and NXT.

“There are times like Survivor Series last year when RAW, SmackDown were coming to NXT and vice-versa where everybody was kind of intermingling, but that also is why things like that are special because we don’t overdo it, we don’t do it all the time,” Breeze said. “If every week you saw RAW and Smackdown guys on NXT and NXT guys on RAW and Smackdown everyone will go, ‘Oh we should have separate brands again.’ It’s one of those things where I want to keep it special. You do it at certain times at the right time and that’s when it’s exciting. We have a lot of options and opportunities, fans just have to be patient.”

Breeze also addressed fan criticism on the booking of the tag team divisions, and how there doesn’t seem to be much focus on those divisions these days. Breeze said he believes tag team wrestling is very strong in WWE, and has been for years.

“Wrestling in general goes in phases,” he said. “I think it’s just one of those things, and in today’s society everybody has an opinion and everybody feels their opinion should be heard and it’s very important, so I think it goes in phases. Everybody goes, ‘There’s no tag teams.’ So all of a sudden there’ll be a bunch of tag teams come out of nowhere and then all of a sudden you’ll switch to, ‘There’s too many tag teams.’ So then all the tag teams will go away. We want everybody’s opinions we want feedback, but at the same time if there’s only a couple tag teams it doesn’t mean that tag team wrestling is dead or it’s struggling it just means there’s been a couple things that have happened and now we’re waiting for more teams to kind of emerge and become a thing, which that’s just the natural course of wrestling in general.”

He continued, “I think that WWE tag team wrestling is very strong and it has been for years. I think even back when we were on Smackdown and there were teams like Gable and Jordan and New Day and The Usos and everybody else. You have all this talent it’s just a matter of when you’re gonna get to see it and when it’s going to be on a show. Even now you got a guy like Cesaro who you can toss with literally any partner and they’re going to be an extremely talented tag team and he’s proven it time after time. It’s just a matter of what we want to do, when we want to do it and it’s just a matter of patience of when you’re going to see it.”