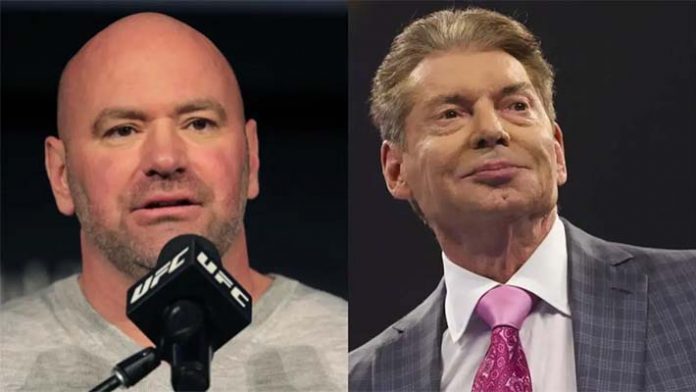 The UFC president, Dana White, was questioned about Vince McMahon’s retirement during a press conference for the Contender Series.

Here is his response:

“Oh, I got stories about Vince for days, but yeah, what that guy built and what he’s done is incredible. He’s been doing it for 50-plus years. I watched that stuff as a kid, and then to still be here and doing it now, is phenomenal. He’s a killer, he’s buried the hatchet in my back a few times, but that’s what you’re dealing with. You don’t deal with a killer and not expect them to try to kill you. Yeah, I have nothing but respect for Vince.”

“They reached out to me [about attending UFC 276] and said that he wanted to come to the fight. I gave him much better seats than he gave me when I went to see Ronda [Rousey]. [laughs] That dude had me in the f**king, I’m not even s**tting you, Ronda says,’ You have to be at this event. I want you to be there.’ I said, ‘Ronda, I wouldn’t miss it for the world.’ She’s like alright, I’m gonna let them know you’re coming.’ Cool, cool.”

“I show up, it’s in New Orleans. I fly down to f**king New Orleans. No going in the back and any of that s**t. They’re at the will call window for you. I go to the f**king will call window, and yeah, we don’t have tickets for you. I call some people, oh yeah, we found them, okay, we got your tickets. When I tell you, we were in the f**king rafters, people were coming up to me and going, ‘Why are you sitting in these seats?’ I said, ‘Well, this is where they sat me. So f**k ‘em, I’m gonna sit right here.’ Then I think it was Pat McAfee today says, ‘Well, no, you had to be in decent seats. You were on camera.’ The cameraman had to f**king crawl over about 75 people, kick somebody out of his f**king seat three rows ahead of me, just so he could get that shot. Yeah, they let me know what they thought of me at that event…”

“When you run an event like we run, and you have people that you know that you know that are coming that you give a s**t about or respect, you make sure that they are f**king taken care of … so when you show up to an event like that — and this is what I do This is what I do for a living for the last f**king 23 years. Message received, you know what I mean? Triple H and Stephanie were there too. It’s not like it was just Vince. This wasn’t 25 years ago, this was like f**king two years ago. And there’s no hard feelings, I get it. Vince is like that. And that’s the way he is, and you know, I sat in my f**king seats and I watched the whole event.”

You can check out footage from the press conference below: