I’ve been covering my local indy companies for this site since my arrival as a writer here. I knew coming in that most, if not all of the readers here had not heard of either of them. Still, I’ve pressed forward because they deserve the coverage, and the attention. That said though, I also said that if they ever decided to work together, they could become an unstoppable force in the world of independent wrestling. Well, this past weekend, May 9th and 10th that is exactly what happened. The UWE and LCW shared talent, and cross promoted a super wrestling weekend in central Pennsylvania, and it was everything I knew it could be.

It kicked off on Friday, May 9th, in Sports City arena, Harrisburg, Pa. when the Ultimate Wrestling Experience held “WrestleRevenge!” The show started with one half of the CZW and FIP world tag team champions, The Juicy Product, David Starr taking on Bobby Shields. This was a very hot opener with both men putting on a show for the crowd of nearly 900 fans. David Starr pulled out the victory and became a solid favorite amongst the crowd, most seeing him for their first time. 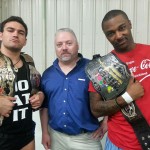 The CEO of the UWE, The Hunter, then hit the ring with the UWE World Champion, The Untouchable Kevin Murphy. Along with them was the owner of Lancaster Championship Wrestling, Jason Smith, and their Lancaster Heavyweight Champion, The Franchise, Shane Douglas. These four men taunted the audience, bragging about their greatness, and how no one deserved to see them wrestle, so they would be enjoying the show from the balcony all night long. Jeff Jarrett, and his wife Karen then hit the ring to the delight of the crowd. Jarrett confronted Murphy, and Douglas about not wrestling tonight, then suddenly embraced that idea, and celebrated with them. The crowd, stunned by the quick turn of events seemed annoyed. Jarrett, laughing at their expense, said he saw no talent outside the men in the ring, and to prove it, he asked Douglas to join him in a challenge to any two guys in the building to face them later that night. The UWE CEO, The Hunter, then said that before Murphy and Douglas take on Sage Strong, and The Red Scorp 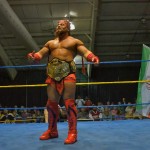 ion, Saturday night, in Lancaster, he had hired The Wrestler of the Millennium, Louis G. Rich to take out the Red Scorpion tonight, and that match was next!

Louis G Rich came to the ring boldly. He was ready to prove that The Hunter had spent his money wisely, but it didn’t take too long for The Red Scorpion to prove that was not the case. The powerhouse fan favorite took everything the wrestler of the millennium could dish out, and overcame it all for a solid victory after a vicious through the ropes piledriver that he calls the Scorpion Spike Driver.

Next up was a four way tag team elimination match to name the number one contenders to the UWE World tag team championship. The Wildcardz vs. C4 and Shane Malice vs Hollywood’s Finest personal security team of Jacobs and Dufor (managed by UWE Women’s Champion Roxanne Steel) vs. Ryan Kolby, and his surprise partner, Zack Rayne. In a fun match, that saw heavy favorites The Wildcardz eliminated second, it was Kolby and Rayne that went on to win the entire thing, and become number one contenders to the tag titles. They seem to be serious about teaming up, so look for big things from these men, as both are serious singles competitors, and should make for an amazing team going forward. 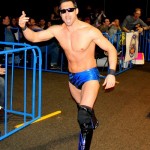 It was then time for who I believe is the hottest wrestler in Central Pennsylvania, Eddie Smooth. Eddie was facing the CZW Wired Champion, Shane, The Swerve, Strickland. In what was by far the match of the night. This bout saw back and forth action, numerous near falls, and high flying moves that only performers like these two can give you. In the end, it was Eddie Smooth coming out on top, after nailing his “Photo Finish” elbow drop, for the 1-2-3 on Strickland!

Jarrett, accompanied by his queen, Karen, along with Lancaster Heavyweight Champion Shane Douglas then made their way to the ring daring whoever was stupid enough to challenge them, to come to the ring. The fans leapt to their feet when local tag team sensations That 80’s team answered the call. While some joked that Jarrett and Douglas were the 80’s team, it was no laughing matter when the bell rang as Joey Money and Petey Noxious tore into the veterans, causing them to fight on their heels just about all match long. Karen Jarrett served as a distraction, as the wily veterans managed to pull off the victory from the jaws of defeat, scrambling out of the ring into the back, as the crowd cheered wildly for the young team that impressed, even in a loss. 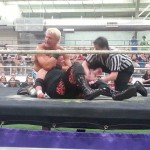 At the last UWE event, Richie Nightmare lost a loser leaves town match to Jay Mack. Since that time, Jay Mack seems to have snapped, even changing his name to Jasysin Omega, and attacking Nightmare, and The Hunter, in the UWE offices. Those actions caused Hunter to reverse the decision from KOG, reinstate Nightmare, and fire Omega. That said though, Hunter promised to make Nightmare do his bidding, and make his UWE career hell because he still hates him. As such, The Hunter declared that Nightmare would now face 24 other men in a battle royal. The winner of this match, just so they would be more inspired to destroy Nightmare, would receive a UWE World title shot that the next event! This was the fastest battle royal I’ve ever seen in my life. It appeared The Red Scorpion was on his way to victory, until distracted by The Hunter, from the balcony, and tossed by Adrian Bliss. In the end, Richie Nightmare survived all 24 men out to eliminate him, and win a shot at the UWE title, much to The Hunters chagrin, and will face The Untouchable Kevin Murphy on the Next UWE event “Meltdown” on July 26th. Before Nightmare could celebrate with the fans, Jaysin Omega ran in through the crowd, with a steel chair, and battered Nightmare with it, as Nightmare’s pregnant wife pleaded with him to stop, from ringside. Finally, UWE security chased Omega out of the building. 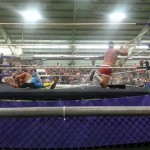 The main event was a hardcore, no rules matchup between Knight of Glory, money in the bank ladder match winner, and UWE’s, U.S. Champion, Laszlo Arpad, and former UWE world champion, and central Pennsylvania mega fan favorite, Sage Strong, with Arpad’s briefcase on the line. The special referee was none other than the hardcore legend himself, Mick Foley! Mick was brought in to assure that Hollywood’s Finest, of which Arpad is a member, would have nothing to do with the result of this match, hardcore rules or not. Miss Brianna, Bookoo Bucks, was still at ringside for Arpad, and interfered at every opportunity, until Sage dragged her under the ring, and she returned handcuffed, and gagged! Foley then proceeded to “spank” her, with a kendo stick, all the way to the back. Arpad and Strong pulled out all the stops. Chairs, tables, kendo sticks, and the ring railing was used by each man to batter the other all over the Sports arena. At one point they fought into the crowd, and Strong performed a moonsault off the side of the balcony onto Arpad, through a table! Karen Jarrett then appeared from the back, and proceeded to throw powder in the face of Mick Foley, so Jeff Jarrett could enter the ring. Jeff then hammered Sage Strong with a booming guitar shot! As Foley slowly recovered, he knew it was time for Mr. Socko, and out he came to deal with Jarrett, much to the crowds delight. Neither man would stay down until Strong set up two steel chairs, center ring, and pulled numerous light bulb tubes, taped together, and laid them across those chairs, and suplexed Arpad through the bulbs! That was enough to get the job done, as Foley counted the 1-2-3 for Strong, giving him the victory and the contract for a UWE World title shot at his choosing. 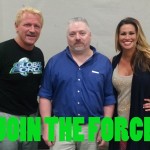 Mick Foley then got on the house mic and told all in attendance to not allow their children to grow up and do “that.” The crowd roared their approval of the night’s festivities. Many remained to great wrestlers staying for meet and greets, as another positive buzz was felt from this UWE card. As I surveyed the crowd, I heard nothing but high praise for each and every match, with nearly everyone I spoke with saying how much they love the UWE, and how excited they were to see Lancaster Championship Wrestling working with them as well. While this night was over, the excitement would continue into LCW the very next night. Make sure to check out my recap of that event here also, as well as listening to my podcast, By clicking here- From The Top Turnbuckle Podcast  on Monday night, for interviews with the stars of the show, including Mick Foley, David Starr, Shane Strickland, and Ed House, as well as others. I will also discuss WWE, TNA, ROH, House of Hardcore, and CZW as well as other indy wrestling around the Country. 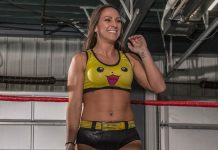 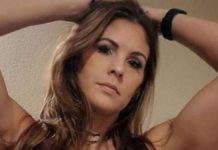