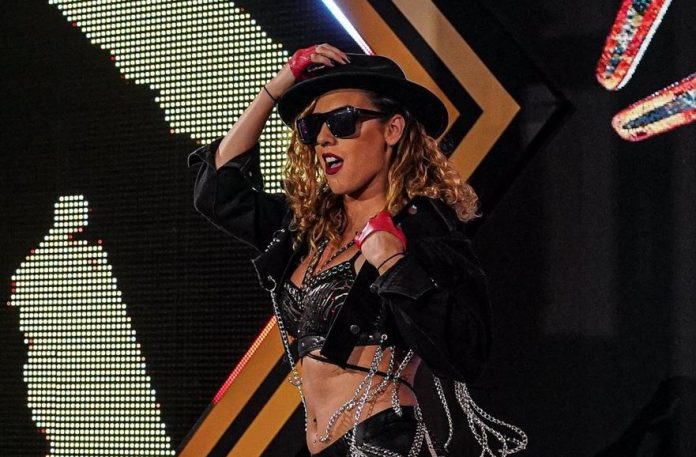 Jacy Jayne reportedly underwent a CT scan after her botched suicide dive during Tuesday’s WWE NXT 2.0 episode. As noted, Jayne was wrestling Persia Pirotta and NXT Women’s Tag Team Champion Io Shirai when she went for a suicide dive from the ring to Pirotta on the floor. Jayne apparently didn’t have enough speed, and landed bad on her head at ringside as her feet got stuck in the ropes. Jayne was checked on by officials as Shirai and Pirotta continued the match. She was then helped to the back during a commercial break, and the match ended with Shirai defeating Pirotta for the right to spin the wheel for next Tuesday’s “Spin The Wheel, Make The Deal” title match at Halloween Havoc.

In an update, it was noted on Wrestling Observer Live that Jayne underwent a full CT scan after last night’s show. She reportedly passed that CT scan as it was described as being OK and clean, which could be a sign that she did not suffer a concussion on the bump. There is still no word on if Jayne will miss any ring time, but WWE still has her advertised for next Tuesday’s Scareway to Hell Ladder Match at Halloween Havoc. That match will see Shirai and Zoey Stark defend the NXT Women’s Tag Team Titles against Jayne and Gigi Dolin, and Pirotta and Indi Hartwell.

Jayne, Dolin and Mandy Rose have not commented on the bad bump or Jayne’s status as of this writing. WWE also has not provided any official update.

This could of ended very badly. Luckily she was okay. #WWE #WWENXT pic.twitter.com/OsuiooK15a