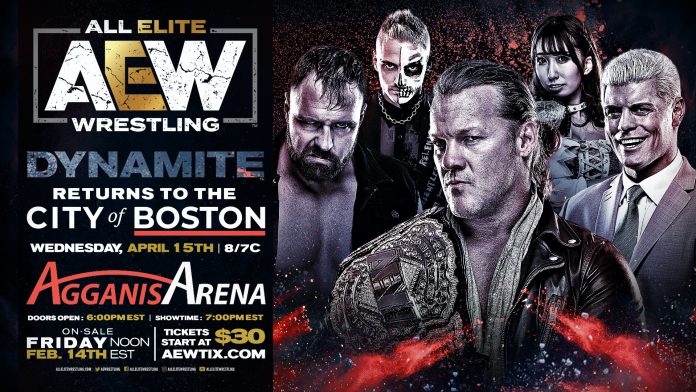 AEW has announced that they will be returning to Boston and Philadelphia in April.

The April 15 AEW Dynamite episode on TNT will take place from the Agganis Arena in Boston, MA. It was also announced that the April 22 Dynamite episode will take place from the Licouras Center at Temple University in Philadelphia, PA. Tickets for both shows go on sale this Friday, February 14 at 12 noon ET, and start at $30. This will be the second time AEW has ran Dynamite from both of these venues.

Below is the updated AEW schedule for 2020:

* February 19 at the State Farm Arena in Atlanta, GA (Dynamite)

* February 29 at the Wintrust Arena in Chicago, IL (Revolution PPV)

* March 4 at the 1STBANK Center in Broomfield, CO (Dynamite)

* March 18 at the Blue Cross Arena in Rochester, NY (Dynamite)

* March 25 at the Prudential Center in Newark, NJ (Dynamite)

* April 1 at the University of Wisconsin at Milwaukee Panther Arena in Milwaukee, WI (Dynamite)

* April 8 at the Chaifetz Arena in St. Louis, MO (Dynamite)

* April 15 at the Agganis Arena in Boston, MA (Dynamite)

* April 22 at the Licouras Center in Philadelphia, PA (Dynamite)