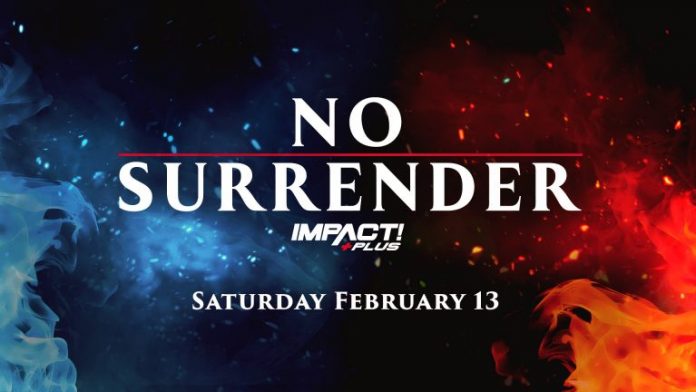 Five new matches have been announced for Saturday’s No Surrender event from Impact Wrestling.

It was announced on tonight’s No Surrender go-home edition of Impact that Knockouts Tag Team Champions Kiera Hogan and Tasha Steelz will defend their titles in a Texas Tornado No DQ Match. Their opponents will be Havok and Nevaeh, who they defeated at Hard To Kill in the tournament finals to revive the Knockouts Tag Team Titles.

Impact has also announced that Jake Something (Cousin Jake) will face Deaner on Saturday. Tonight’s show featured a segment where Jake came down to address Eric Young’s invite to join the Violent By Design stable. Jake ended up revealing his new name to be Jake Something, but the group didn’t like that answer. They ended the segment by putting a steel chair around Jake’s neck, then EY announced Deaner vs. Jake for Saturday’s event.

Another six-person match has been announced for No Surrender but this will be intergender action. XXXL’s Ace Romero and Larry D will team with Tenille Dashwood to face Black Taurus plus Rosemary and Crazzy Steve of The Decay.

Finally, the Impact World Tag Team Titles match has been decided for No Surrender. The Good Brothers will now defend in a Triple Threat against Chris Sabin and James Storm, and AEW’s Private Party. This week’s Impact go-home main event saw Doc Gallows and Karl Anderson defend their titles against Sabin and Storm, with the winners going on to face Private Party at No Surrender. However, Private Party interfered as Sabin was about to pin Anderson, which led to Impact Executive Vice President Scott D’Amore announcing the Triple Threat for No Surrender.

Impact No Surrender takes place this Saturday, February 13 from Nashville. It will air exclusively on the Impact Plus platform. Below is the final card:

Triple Threat Revolver Match to Determine X Division Title #1 Contender
Josh Alexander vs. Willie Mack vs. Trey Miguel vs. Suicide vs. Daivari vs. Blake Christian vs. Chris Bey vs. Ace Austin
Three competitors start the match and a new competitor will enter after someone is eliminated, until everyone has entered. The final three competitors will battle until there is a winner, by pinfall or submission.

Matt Cardona and Eddie Edwards vs. Brian Myers and Hernandez

Jake Something vs. Deaner