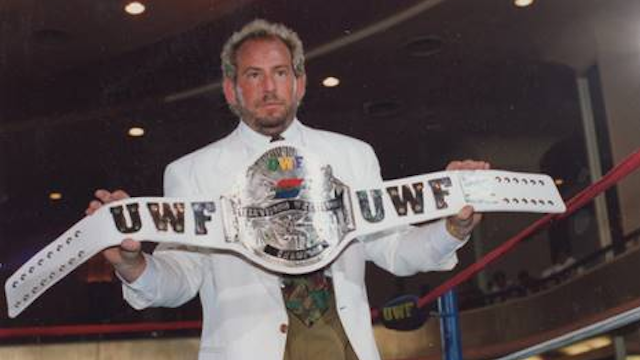 One of the perks, if you want to call them that, of being a pro wrestling columnist is I get the chance to review some projects to give readers an idea if a specific product is worth the time, the effort, and most importantly, the money. As Kevin Nash once said when he quoted crusty agent, “Chief” Jay Strongbow in the early-90s, “the only thing that is real about the business are the money and the miles.”

After doing a write-up on Jonathan Plombon, author of “Tortured Ambition:The Story of Herb Abrams and the UWF,” I was sent a copy of the book to give my opinion on it. After learning about the extensive writing process from doing the previously mentioned article, I was interested to see what this publication was really about. As we know, Herb Abrams was an eccentric promoter that actually thought his start-up group would rival Vince McMahon or Ted Turner. Abrams’ life, much like the Universal Wrestling Federation itself, fizzled out rather quickly after he died from a cocaine-induced heart attack in 1996.

But who was Herb Abrams?

The guy, despite being the subject of a Dark Side of The Ring episode on Vice TV during the early months of the pandemic, was still a riddle to even the most knowledgeable insiders. I have to say Plombon, who explained the exhausting process of not only digging up little-known facts about Abrams, but also sifting through different reports to gather the most accurate account possible, did a very good job of painting the picture of Herb’s early life, particularly some of the childhood trauma that might’ve contributed to his erratic behavior later on. Mocked for his heritage and background in his youth, those scars probably had something to do with Herb’s pursue of acceptance into the professional wrestling world.

A very key observation that the author makes throughout the publication is that he uncovered facts that weren’t previously known about the UWF promoter. Like so many in the northeast during his youth, Herb idolized Bruno Sammartino, and the legendary former champion being taken off of WWF television in the late-80s plays an interesting role in the formation of the UWF, which Plombon details quite well. Readers also get the chance to see how this mystery man was able to finance the company at the start, and then the departure measures he attempted to try to keep it afloat. Throughout the pages, you get a very clear play-by-play of how both the pressure started to mount on Abrams, as well as when he started to completely unravel after his group failed to get off the ground.

One of the aspects I found most interesting is how the book gives a view point of the other two national organizations at the time, the WWF and WCW. It’s very easy to write-off the UWF in hindsight because we know that it failed, but to take a snapshot of the industry at the time tells a different story about the potential for a third option in the United States. The WWF had started to cool off after The Ultimate Warrior didn’t take the spot as the next Hulk Hogan, and WCW was considered a mess when Turner executives didn’t know how to run a wrestling company. This is where the insight into the early formation of the UWF group is very interesting. You will hear from names you might not have heard of before, but those that played critical roles in those early days. Promoters such as Karl Lauer, and wrestlers like Jack Armstrong and Sunny Beach give detailed interviews about how a third league was jump started in America.

Perhaps my favorite part of the book is that you can read about how the UWF landed its spot on Sports Channel America, specifically because it could’ve theoretically given the promotion the exposure to make a splash on a semi-national level. I think too often in the modern era, particularly with the use of the internet as a platform for content, some fans might not realize how key television was for any wrestling group to get notoriety in the early-90s.

As far as what impact the UWF could’ve made in its early days, there’s a very compelling story about how the group’s first live event was cancelled and a few theories about how it happened. You get the sense as the book progresses that Abrams’ willingness to over pay talent, the publication details that he was willing to spend $2,500 a show for John Tolos to work as a color commentator, was a fragile attempt for him to gain some acceptance in his life. In truth, Abrams’ naive approach made him a sheep among wolves in most cases because the shady side of the business is truly a shark tank. It was no surprise that when Abrams’ money started to run out, his “friendships” in the industry did as well.

Overall, the writing approach to this book was well-done. The Universal Wrestling Federation by nature is a niche of pro wrestling history, and those that would be interested in the parsed details of the company have to be diehard fans so the author tailors the publication toward that demographic. Granted, the other side of the coin might be that the pages have a limited market, but the point being, the author knew what he wanted to accomplish with this and took it in the right direction to complete a project that truly chronicles that history of Herb Abrams’ UWF.

The downward spiral of Herb Abrams can be a tough read at certain points, specifically when he asked a publisher why the UWF wasn’t being covered in a series of magazines after the company had been dormant for nearly two years, and Herb insist there were big plans in the works for his promotion.

The detail of the book is very well-done, as it chronicles the history of the organization, as well as gives a synopsis of the television episodes and the live events. On the surfaces, it might sound like these small details aren’t necessary, but you have to keep in mind that even with some UWF shows on Youtube, there isn’t a complete or official video catalog available to the public so it is key to have the live event reports. Finally, I would say this book is worthwhile if you’re a diehard fan that wants to know how the UWF almost got off the ground and the details of it’s history.

If you would like to purchase the book you can find it on Amazon https://www.amazon.com/Tortured-Ambition-Story-Herb-Abrams/dp/B09FSGV96T