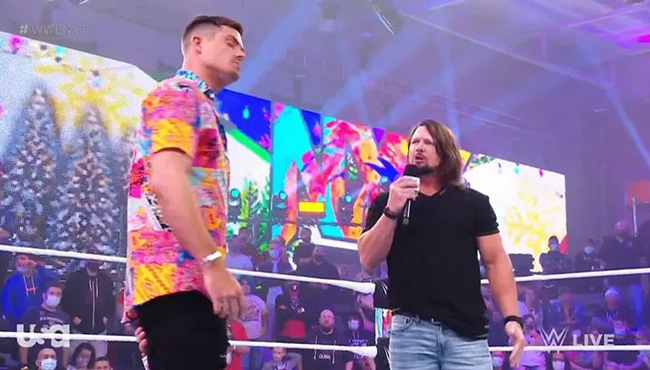 AJ Styles made a rare WWE NXT appearance on tonight’s show, just his second in the history of the brand.

Styles came to NXT 2.0 to confront Grayson Waller, who had taunted Styles via social media videos over the weekend. After Dexter Lumis defeated Trick Williams on tonight’s show, Waller attacked Lumis from behind with a steel chair. Waller laid Lumis out and said he planned to take out the best in NXT one-by-one, a mission that began earlier this month with Johnny Gargano and LA Knight. AJ then appeared on the big screen, and was shown arriving in the back area. Waller took a seat in the ring and waited on AJ as NXT went to commercial.

After the break, Waller cut an in-ring promo on how he hates it when people get inducted into the WWE Hall of Fame and they waste time on thanking fans. Waller said when he’s inducted, he will thank himself and say “told ya so!” to everyone else. Waller continued until the music interrupted and Styles made his entrance to a pop. Waller took credit for single-handedly bringing AJ to NXT, but the RAW Superstar told him to shut up, which brought out a “shut the hell up!” chant from the crowd.

Styles and Waller then had words on the mic, with AJ calling Waller the biggest asshole around. Waller said AJ didn’t come to NXT to be the veteran who helps the new guy, he came to NXT because his meal ticket, Omos, left him, and he needs a new meal ticket to stay relevant on RAW. This was a reference to AJ and Omos splitting up during this week’s RAW. Waller said he appreciates AJ’s offer, but he’s more of a singles guy.

AJ fired back, saying Waller called him out just to get “the AJ Styles rub,” and then accusing Waller of copying his in-ring attire with the gloves and single elbow pad. AJ admitted Waller has some potential, but he’s not a future Superstar like Bron Breakker, Tony D’Angelo or NXT North American Champion Carmelo Hayes. AJ went on and said the jury is still out on Waller, but his problem is he would rather look good and lose than look bad and win.

The war of words between Styles and Waller continued until Waller declared that he could end AJ right then and there if he wanted. AJ told him to do it, and challenged him to try and be phenomenal for 20 years instead of having just a few good weeks. AJ then dropped the mic and told Waller to bring it, but Waller exited the ring to boos. Waller laughed from ringside and said he will let Omos deal with AJ first, but then he has next.

Waller responded to his meal ticket line on Twitter and wrote, “Facts.”

It’s possible that AJ will return to NXT next Tuesday, and that’s where they will confirm Styles vs. Waller for the NXT New Year’s Evil special on Tuesday, January 4. Styles vs. Omos has been announced for next week’s RAW, and that’s what Waller was referring to when he said he has next on AJ. It’s rumored that the Styles vs. Omos rematch will happen at the WWE Day 1 pay-per-view, which is scheduled to take place three days before the NXT New Year’s Evil special.

Stay tuned for more on the Styles vs. Waller program. Below are related shots and tweets from tonight’s NXT 2.0 episode:

You've had a good 3 weeks, @GraysonWWE…

Try being PHENOMENAL for over two decades. 👏#WWENXT @AJStylesOrg pic.twitter.com/Uq9ltKjA91

Do it. We triple dog dare you, @GraysonWWE. #WWENXT @AJStylesOrg pic.twitter.com/ehIG1CeTMP