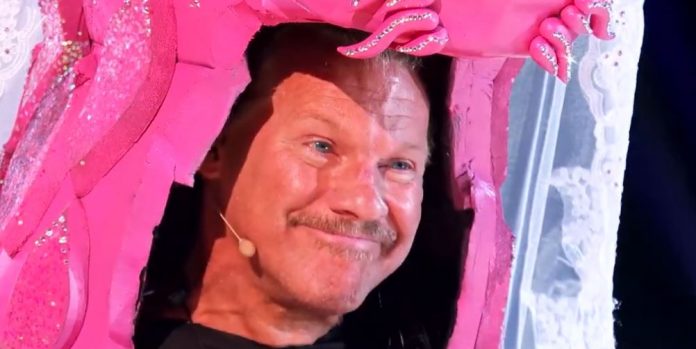 On Wednesday night’s episode of The Masked Singer on FOX, ROH World Champion Chris Jericho was officially revealed as Bride.

Jericho made his debut as the pink dinosaur in a wedding gown “Bridezilla” character last week, singing Walk The Moon’s “Shut Up and Dance.” Pro wrestling fans could tell that this was the top AEW star in the costume, with many calling it the worst-kept secret in Masked Singer history.

On The Masked Singer, Jericho competed against Snowstorm and Avocado. Jericho performed “All Star” by Smash Mouth and “White Wedding” by Billy Idol. The show’s clips are available below.

“They have a movie career and they like to show off their chest like Jenny McCarthy, minus the movie career,” Jon Lovitz said of Jericho’s character.

The screen’s graphic appeared to use an older Jericho photo from his WWE days, but he was billed as a “Legendary Pro Wrestler and Musician.” Cannon then interviewed Jericho on stage, and he joked that the Bride character had been inside him his entire life, and he was finally given the opportunity to play it. Jericho stated that he was surprised and had a great time, and that the Bride costume was the best he’d seen on the show. He also expressed his disappointment at being defeated by an avocado.

Jeong, a well-known pro wrestling fan who served as a WWE RAW guest host in 2009, stated that he is a genuine fan of Jericho and has followed him since his WCW and WWE days. Jeong lauded Jericho as a charismatic performer, singer, and superstar athlete, adding that he’s a true fan and a little starstruck.

Jericho was eliminated from the competition as a result of his unmasking. Adam Carolla was revealed as the Avocado character in the second elimination. The Snowstorm character will move on to the next night.

The eighth season of The Masked Singer was taped over the summer. Jericho appeared on tonight’s live Full Gear go-home AEW Dynamite, teaming with Sammy Guevara in the opener for a loss to Claudio Castagnoli and Bryan Danielson. Jericho finished with Castagnoli’s Sharpshooter.

Jericho will now defend his ROH World Title against Guevara, Danielson, and Castagnoli at AEW Full Gear on Saturday in a Fatal 4 Way match.

Below are clips from Wednesday night’s Masked Singer reveal with Jericho, as well as performances from last week:

That performance by #BrideMask really had a 💍 to it! #TheMaskedSinger pic.twitter.com/kr1zaTeNlx