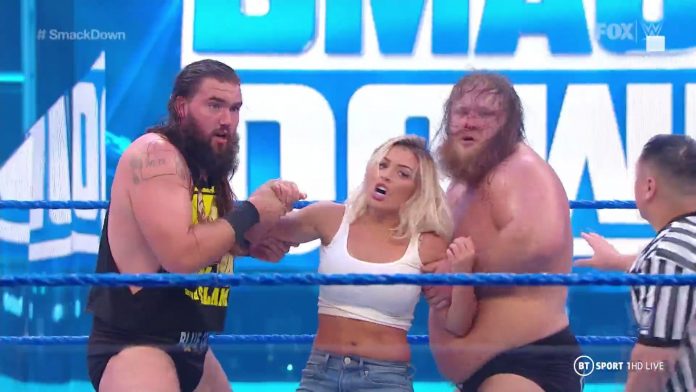 SmackDown saw Rose attack Sonya Deville for a No Contest finish to the tag team match with Heavy Machinery vs. The Miz and John Morrison. Rose was looking for payback from last week’s attack, which saw Deville cut Rose’s hair and beat her around the dressing soon. Tonight’s tag team match was made after a talking hairpiece called Mandy Rose’s Hair was the guest on The Dirt Sheet with Miz, Morrison and Deville. Tucker and Otis, with his Money In the Bank briefcase, didn’t appreciate the so-called jokes, so they hit the ring and interrupted the segment. Rose and Deville brawled around the ring tonight and were separated several times between the two tag teams and WWE officials. SmackDown went to commercial and came back to another argument between Rose and Deville in the back. This was right before the big RETRIBUTION invasion.

Corey Graves referred to Rose during commentary as the “World’s Greatest Soccer Mom” because of her new look. As seen below, Rose tweeted a selfie of the new look and used that line from Graves.

It’s rumored that Rose and Heavy Machinery will face Deville, Miz and Morrison in a six-person mixed tag team match at WWE SummerSlam on August 23.

Here are a few shots from tonight’s angle on SmackDown: