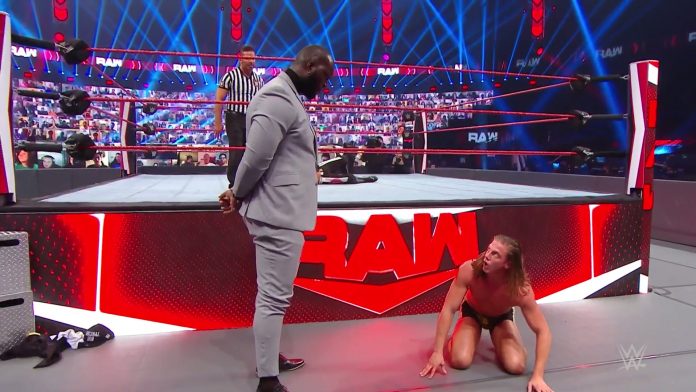 AJ Styles came out with his new bodyguard on tonight’s WWE RAW season premiere episode. AJ’s new muscle is Jordan Omogbehin. The big man previously appeared on WWE TV as the RAW Underground bouncer, and as the largest ninja in Akira Tozawa’s group.

Tonight’s show saw AJ defeat Matt Riddle while Jordan watched from ringside. The match was delayed a bit as Jordan refused to leave the ring when asked by the referee. The referee started a 5 count and threatened to disqualify AJ if Jordan didn’t leave. Jordan left but only after grabbing the referee’s arm in the middle of the count. Jordan later got involved by intimidating Riddle at ringside, forming a fist and staring Riddle down. A terrified Riddle quickly ran back into the ring, and ended up taking a Styles Clash for the finish.

The 26 year old Omogbehin was born in Lagos, Nigeria and played college basketball for the University of Florida and for Morgan State University. He was recruited to the WWE Performance Center in October 2018, and later made his WWE NXT in-ring debut at a live event on July 18, 2019. He’s worked just a handful of NXT live event matches since debuting. There’s no word yet on where WWE is going with the new Styles-Omogbehin pairing, but AJ cut a pre-match promo on how he was back to run RAW, giving credit to the “Powers That Be” of RAW for drafting a leader.

There is no officiating when this man's around.#WWERaw @AJStylesOrg pic.twitter.com/rgKuVHgR4K

It looks as though @SuperKingofBros has a GIANT problem on #WWERaw!

And that's a problem solver for @AJStylesOrg! pic.twitter.com/Ko4I7SDlbe

To say this was a HUGE win for @AJStylesOrg would be an understatement. #WWERaw pic.twitter.com/q9FyGwHRc0