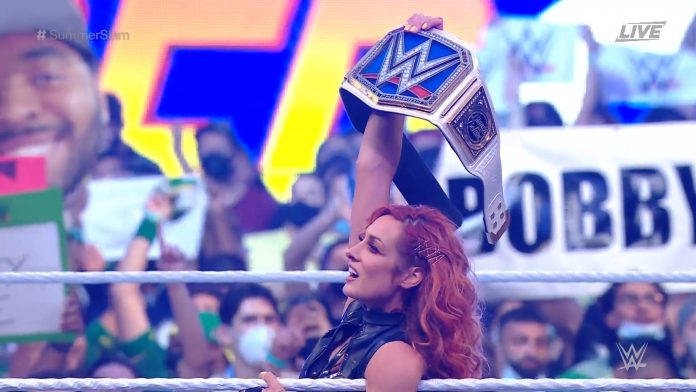 SmackDown Women’s Champion Becky Lynch has advice for Ronda Rousey if she’s looking to make a WWE comeback after giving birth to her first child earlier this year – don’t try it. Lynch became a mother last December, welcoming her first daughter with Seth Rollins. Rousey then welcomed her first child this past September, a daughter with Travis Browne. The WWE rivals have been rumored to continue their feud once they’re both back to work, but there’s no word on when that may be. Lynch spoke with TMZ Sports this week and was asked if she has any advice for Rousey on how to navigate being a mother and a WWE Superstar.

“Don’t, because I’m still on top. Ronda, you won’t like it. That’s my advice,” Lynch said.

Lynch also talked about what it’s been like since making her return to WWE at SummerSlam in August.

“Yeah, it’s been crazy, man, because it went from 0 to 100 real quick,” Lynch said. “So coming back, and then coming back on top after not wrestling for a year and a half, it’s been wild, but it’s been amazing, and my baby comes along everywhere with me, except right now, I’m in New York and left her home for the first time in 10 months. And look, she hasn’t slept through the night in 10 months, but I leave and she sleeps through the night. So, there we go.”

Lynch will headline tonight’s Supersized edition of SmackDown on FS1 in a non-title match with Sasha Banks. She was asked what fans can look forward to on the show.

“Look, I have been fighting Sasha Banks since 2015,” she said. “Sasha has been making comebacks and kicking me out of rings since 2016. Most recently she did it at Extreme Rules back in September, and so look, the last time we faced each other was at Hell In a Cell, the most brutal match you can have in WWE, and Sasha Banks still has nightmares about that. That’s why she keeps leaving and coming back, because she’s still having nightmares about the last time I whooped her ass. So, I’m going to whoop her ass [tonight], too.”

Lynch will then head to Saudi Arabia for the first time to defend against Banks and Bianca Belair in a Triple Threat at WWE Crown Jewel next Thursday. She was asked about the big match and her first trip to the Kingdom.

“This is my first time over there, and so I don’t think that you can have a bigger match in women’s wrestling, hell, in wrestling, than myself vs. Sasha vs. Bianca,” she said. “That is three WrestleMania main eventers right there, in one ring, one person coming out on top and that’d be me. But look, I think it’s also so important that we have the biggest match in women’s pro wrestling in Saudi Arabia, which I think if we can show a little girl over there what’s possible, and so even maybe one will have a look and say, ‘Maybe that’s what I want to do, oh that’s possible and I can do that,’ and if we encourage one person to know what’s possible, then that means everything.”