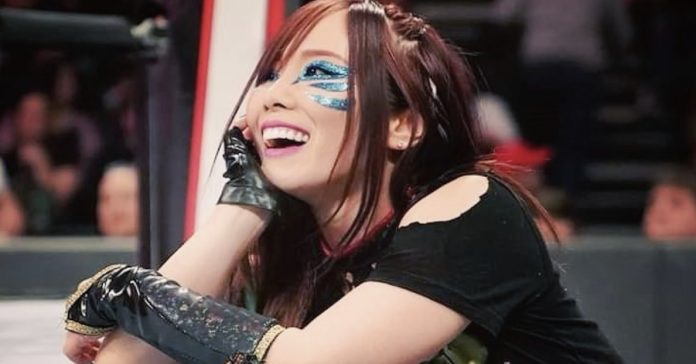 As seen above, WWE has released a new video on Kairi Sane’s WWE departure. Sane finished up with WWE on this week’s RAW and is reportedly headed back to Japan to be with her husband, who she just married in February after a longterm relationship. Sane is leaving WWE on good terms, and may be affiliated with the company in some way, but not an active member of the roster.

The video above features a behind-the-scenes look at Sane reflecting on her final moments with the company. There are also comments from Asuka, Akira Tozawa and SmackDown Tag Team Champion Shinsuke Nakamura. The clip notes that Sane is returning to Japan to be with her family. It shows Sane saying goodbye to the ringside announcers following her final match, which was the win over WWE Women’s Tag Team Champion & SmackDown Women’s Champion Bayley on the June 20 RAW episode. Sane looked back on her time with the company.

“Three years ago I just started training at the Performance Center,” she said. “Time flies so fast. I had so many opportunities. I became the Mae Young Classic Champion, NXT Women’s Champion, and WWE Women’s Tag Team Champion. I am so happy, I am the happiest woman.”

The video also includes footage of The Kabuki Warriors backstage at RAW. They were both emotional as Asuka talked about being lonely before Sane came to the main roster.

“I’ve been lonely until she came to the main roster,” Asuka said. “I was so lonely before you joined me, so you saved me so much.”

Nakamura added, “You are like a little sister to all of us, and you definitely will be missed.”

The video included more footage of an emotional goodbye between Asuka and Sane. “It was an awesome exerpience for me. I will never forget this time,” Sane said. “Thank you for cheering me. I really, really appreciate it.”

A WWE producer asked Sane what’s next for her. She said, “I am a pirate, so never stop voyage, right? So I’m going to next voyage. Bon Voyage! See you soon, ahoy!”

On a related note, WWE Intercontinental Champion AJ Styles took to Twitter this afternoon to praise Sane. He thanked The Pirate Princess for sharing her time and hard work with everyone.

“@KairiSaneWWE will be missed in the @WWE,” AJ wrote. “From the elbow to the forearm you are one of the best. The truth is there is no place like home. Thank you for sharing your time and hard work with us.”

@KairiSaneWWE will be missed in the @WWE From the elbow to the forearm you are one of the best. The truth is there is no place like home. Thank you for sharing your time and hard work with us.