As PWMania.com reported, Bray Wyatt suffered a foot or ankle injury at Wednesday night’s WWE live event in Milan, Italy during a match with WWE Champion Roman Reigns. A few minutes into the match, Wyatt was brawling with Reigns in a corner and backed off and slipped. He immediately started to grab hold of his leg and the match was called off. Officials were out almost immediately to tend to Wyatt.

You can check out footage from the match below: 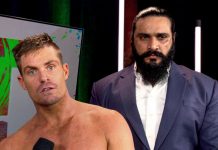