Arda Ocal recently caught up with WWE Hall of Famer Bret “Hitman” Hart. In the interview, Hart talks about traveling up the roads in treacherous weather conditions for his father Stu in Stampede wrestling, the coldest he’s ever felt, and Hart recalls a time wrestling outdoors in India vs. the late Yokozuna that led to one of the grossest things he had ever seen in the ring during his career. 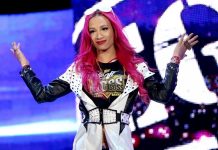 WWE Does DUI Storyline With Jeff Hardy On SmackDown (Video)