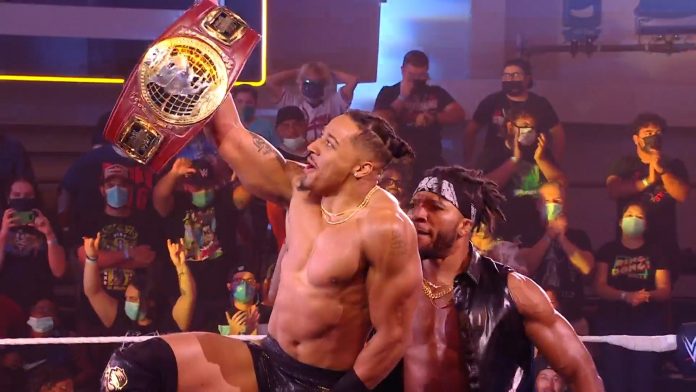 WWE NXT North American Champion Carmelo Hayes took to Twitter this week and made a bold statement about his status on the brand.

Hayes won the title back on October 12 by cashing in his Breakout Tournament title shot on Isaiah “Swerve” Scott. Since then he has been referring to the North American Title as the “A Championship” of NXT and in this new promo, he declared that he is the new face of the brand. Hayes also called out Pete Dunne, Johnny Gargano and NXT Champion Tommaso Ciampa.

“Hey, this is to all of you veterans that are pressed at the fact I’m calling myself The A Champion,” Hayes said. “I’ll let you know right now, I don’t care what you guys think – Tommaso Ciampa, Pete Dunne, Johnny Gargano, I’m not worried about y’all, I’m gonna keep doing what I’m doing because at the end of the day when I get in the ring I don’t frickin’ miss. So from this point on, this is my show, this is my brand, I’m the new face of NXT and that’s all there is, that’s all it’s gonna be, and y’all can just kiss my ass.”

Hayes later tweeted, “Not a wrestling promo I really feel this way”

It’s believed that Hayes will defend against Gargano in the near future, but the match has not been announced. Hayes and Trick Williams have been feuding with Gargano and Dexter Lumis for a few weeks now.

Not a wrestling promo I really feel this way https://t.co/oCXihJQCDF