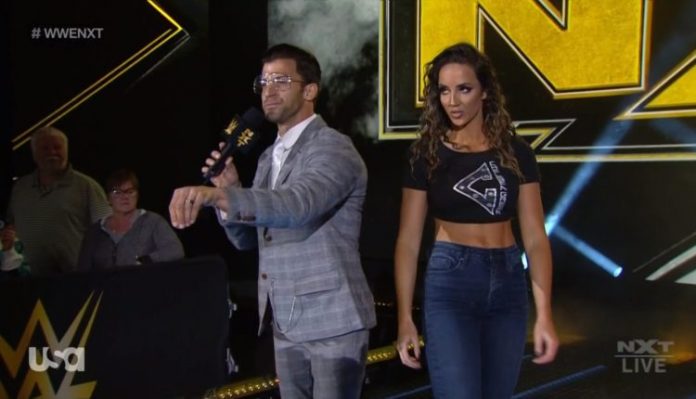 The Robert Stone Brand is now without a Superstar. As seen above, Chelsea Green fired Stone during a post-show video with McKenzie Mitchell after this week’s WWE NXT episode went off the air. This week’s show saw Green team with NXT Women’s Champion Charlotte Flair, as Flair’s mystery partner, to defeat Io Shirai and Rhea Ripley.

Mitchell asked Green how sweet the win was, but Green passed the microphone to Stone to answer.

Green said she’s as hot as she’s ever been coming out of this week’s show, and that’s why she’s done with Stone.

“You’re right,” Green responded to Stone. “Ever since signing with The Robert Stone brand, it’s worked. We’ve worked. After tonight Chelsea Green is the hottest she’s ever been. That’s why you’re fired.”

Green then walked off as Stone joked around about her comments. He quickly realized she wasn’t just joking around, and walked off after her, asking if she was just kidding. Green then confirmed the dismissal in a post-show tweet.

Stone responded to the same tweet and said he’s going to be OK.

There’s no word on the future of The Robert Stone Brand or who Stone might sign to his roster next, if the storyline continues. It looked like Stone might recruit Aliyah a few weeks back, but he dismissed that idea during NXT TV and on social media. For those who missed it, below is video from Flair and Green vs. Shirai and Ripley, along with the full post-show tweets from Green and Stone:

I’m gonna be ok. Everything is going to be ok. It is. It really is. https://t.co/LvOOqMbpz9