As it was announced earlier this month, former WWE superstar and New York Times best selling author Chris Jericho will be participating on the upcoming season of the hit ABC show, Dancing With The Stars.

Jericho’s dance partner will be professional dancer Cheryl Burke, who has competed on the show before.

The first footage has been posted online of Chris Jericho and partner Cheryl practicing their moves in preparation for the upcoming competition.

Check it out here:

Season 12 of Dancing with the Stars premieres next Monday night, March 21 on ABC.

Shotzi Blackheart Gets Her Stolen Car Back (Video) 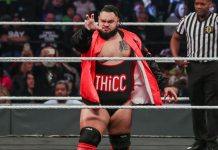 Video: Behind The Scenes Look At NXT Wrestler Bronson Reed