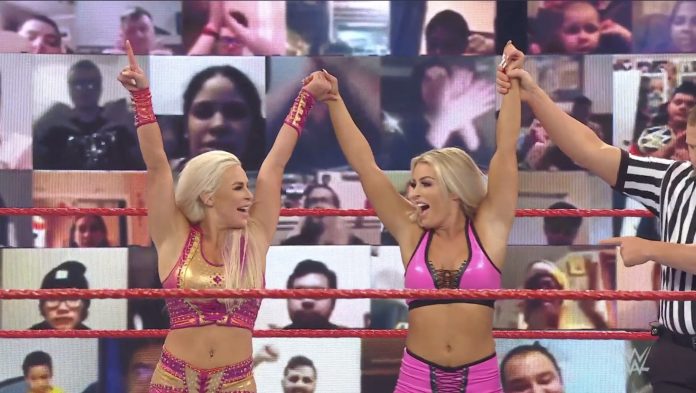 Mandy Rose isn’t the only WWE Superstar to join RAW from the SmackDown roster as Dana Brooke has came over with her. Tonight’s RAW episode saw Lana and Natalya threaten to stay in the ring until WWE Women’s Tag Team Champions Shayna Baszler and Nia Jax were stripped of the titles due to how they aren’t currently medically cleared to compete. Baszler and Jax will still defend against The Riott Squad, but at a later date when they return from reported COVID-19 precautionary measures. WWE Producer Adam Pearce interrupted Lana and Natalya, and said he couldn’t strip the champions, but he could grant a match to Lana and Natalya, against the newest members of the tag team division on the red brand. Pearce then brought out Rose, and then Brooke.

Brooke and Rose ended up defeating Lana and Natalya in tag team action. Rose hit a pump knee strike on Lana to get the pin. As we’ve noted, The Miz recently had Rose sent to RAW from SmackDown as a way to taunt Otis, who he has been feuding with. Tonight’s RAW was the first we’ve heard of Brooke also being traded to RAW.

We have a new tag team on #WWERaw! What do you think of Mandy Rose and Dana Brooke as a tandem? pic.twitter.com/iTaNpVWg48