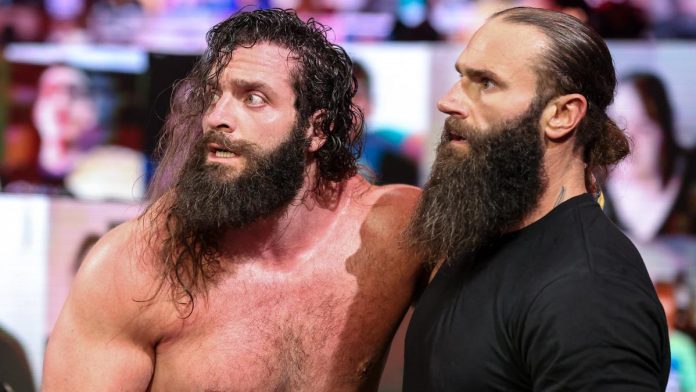 The tag team of Elias and Jaxson Ryker is no more.

This week’s Memorial Day edition of WWE RAW saw Elias and Ryker challenge RAW Tag Team Champions AJ Styles and Omos. Before the match, Elias hyped Ryker up in a backstage segment and talked about going into battle as Ryker stared ahead, in what Corey Graves would later call a “thousand yard stare,” which is a phrase used to describe the gaze that combat veterans often have. Ryker, a United States Marine, suddenly responded to Elias and asked him the same question, then reminded him that he was in the Iraq War. The match saw Ryker go back & forth with AJ until Omos tagged in. Ryker then leaped to tag in his partner, but Elias pulled his arm back and jumped down off the apron. Ryker was shocked and fans immediately started to boos the swerve from Elias. Ryker yelled at Elias, asking what was he doing, while Omos began to mount offense to put Ryker away for the finish with AJ. Elias watched from the stage and gave a “told you so” shrug back at Ryker in the ring.

As seen in the video below, Kevin Patrick later stopped Elias backstage and asked why he abandoned Ryker in the ring.

“Listen, Jaxson Ryker has become unhinged,” Elias declared. “OK, when he came to me, he wanted to walk with me. He knew if he opened himself up to my genius, and I took all of his attributes and incredible strength, I could mold him into something special, but last week when I was in danger, he was running away from Elias. He was looking out for himself. His priorities are just all out of whack.”

Patrick then pointed to how Ryker defeated Styles in singles action last week. Elias responded, “With my help, but where was he when I needed help?. Elias continued and acknowledged Ryker being a veteran, but said the idea of going on the road and sharing a car with Ryker makes him sick. Elias then declared that he no longer wants to be around Ryker.

“Listen, Jaxson Ryker’s a veteran and I respect that 100%,” Elias continued. “He’s an incredible athlete, and his strength & stamina, it’s through the roof, but he’s unpredictable and that’s what worries me. Now listen, we’re very close to getting back on the road, live shows with millions of people wanting to ‘Walk With Elias’ but the idea of sitting in a car, going town to town for hours at a time, next to Jaxson Ryker, makes me sick, and I don’t want to be around him anymore.”

Elias tweeted a poll after RAW and asked fans if he did the right thing. As of this writing, there are 6,767 votes with 51.3% voting “Of course you did” and the other 48.7% voting “Yes.” Ryker has not commented on the split as of this writing.

"We're very close to getting back on the road, live shows and millions of people wanting to walk with @IAmEliasWWE. But the idea of sitting in a car going town to town for hours at a time next to @JaxsonRykerWWE makes me sick. And I don't want to be around him anymore."#WWERaw pic.twitter.com/HbVkm9SMFZ

Did I do the right thing?

Did I do the right thing?