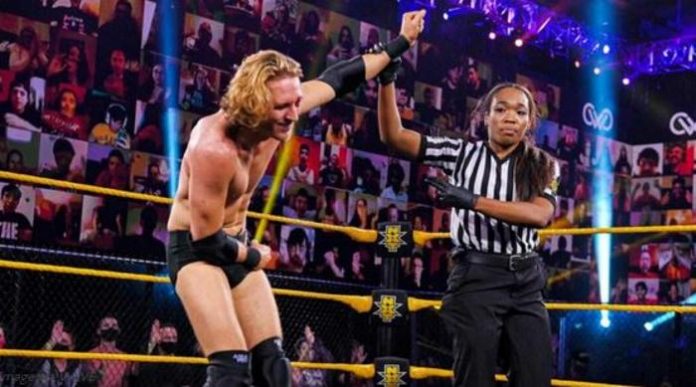 Former WWE Superstar Curt Stallion (Camron Rogers, aka Stallion Rogers) has issued a statement on previous comments he made about transgender people.

Back in the summer of 2020 Stallion appeared on the 13th episode of The Double K Show podcast. The episode has since been deleted, but you can hear some of the audio clips in a Twitter thread. Stallion’s interview was done right after he had been accused of groping another man in the “#SpeakingOut” movement on social media. Stallion discussed the allegations during the interview and seemingly admitted to the groping, describing it as “sack-packing” the man, or quickly hitting him below the belt. He also referred to “purple haired chicks who say they’re dudes” on Twitter, which is why he’s receiving backlash now that the comments have resurfaced this week.

“There’s got to be like more than what there is, allegations… it’s just because people get so up in arms on the internet, on Twitter especially. Like all those purple haired chicks who say they’re dudes and stuff,” Stallion said.

Stallion then addressed the groping allegation during the 2020 interview. “I just sack-packed him – boom! And when I sack-packed him, he hunched over in pain, and he picked himself up 5 seconds later, and my brain was just like, do it again, so I sack-packed him again – aahh! And he went back down,” Stallion recalled. “Anyways, I hadn’t seen him since, honestly, about a month after that. He was saying such nice things about me on Twitter, like, ‘Oh, Curt Stallion this and that, he makes skinny guys believable and yadda-yadda.’ And then whenever all this cancel culture shit came out, he was like, ‘Man I haven’t been getting attention on Twitter in a long time and Curt Stallion unfollowed me, so I’m really butt-hurt at him.’ He was like, ‘I’m gonna say that Curt Stallion sexually assaulted me and kept touching my wiener in front of Matt Riddle and a bunch of trainees. So yeah, a bunch of people, a bunch of people I say, maybe like 40 people unfollowed me on Twitter and like 10 people were like, ‘Curt Stallion is the devil!’ And I was just sitting here like, ‘Hahaha!'”

Stallion later said in another audio clip that resurfaced on Twitter from the 2020 interview, “I am not anti-gay, I’m not anti-trans, whatever. Like, I just think what I think, you can think what you think, at the end of the day everybody’s happy, and if you’re not happy with the way I think, I don’t give a shit.”

The comments resurfaced on Twitter this week, which led to Stallion taking to Twitter this afternoon with a video statement. Stallion apologized for the remarks, and anything else he’s said or done to hurt people in the past, and promised to donate a percentage of his remaining 2021 bookings to the National Center for Trans Equality.

“Hi, my name’s Camron Rogers. I wrestle as Stallion Rogers, formerly known as Curt Stallion. It has been brought to my attention that at some point in the past, I said some really stupid transphobic shit on a podcast that I should have never said,” he said. “I’ve taken a few days to address the issue at hand because I needed to really step back and reflect on myself to make sure that this wasn’t just gonna be some PR stunt to save my career or whatever, because that’s not what this is about, nor has it ever been. I am disgusted with the way that I’ve made people feel with the things that I said. I never wanted to be that guy, nor do I ever want to be. So with that said, I sincerely apologize to anybody whose feelings were hurt by the things that I said or anything that I’ve done in the past, recorded or not. I would like to grow from this and move on, and hopefully we can do that together. So with that said, any future potential bookings that I may receive for the rest of 2021, I’ll be donating a percentage of that to the National Center for Trans Equality. Thank you all very much, and have a wonderful rest of your week.”

After a run with EVOLVE and on the indies, Stallion signed with WWE in October 2020, then was released on June 25 of this year. He spent most of his time on WWE 205 Live, but also had a few WWE NXT matches. Stallion has been working the indies since getting released from his WWE contract, but recently made his AEW debut. Stallion and former WWE star Anthony Greene (fka August Grey) teamed up for a loss to FTR on the September 21 edition of AEW Dark, in a match that received praise from wrestlers and fans on social media. Stallion also lost a match to Joey Janela at those September 11 Dark tapings in Orlando, but it will be interesting to see if that match airs now that his 2020 comments have resurfaced. Stallion noted in an interview that he assumed his good friend Eddie Kingston got him the opportunity at the Dark tapings.