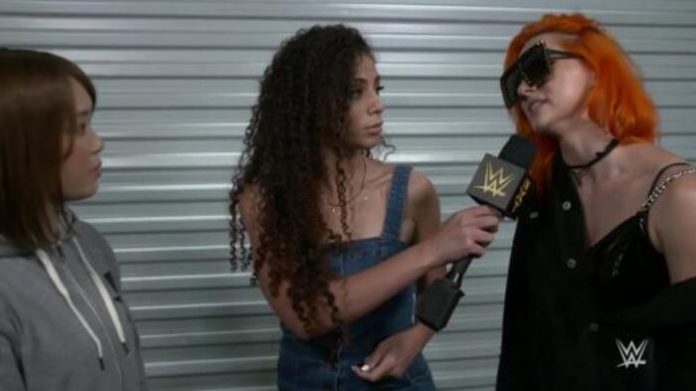 Sarray has been challenged by Gigi Dolin for a match on tonight’s WWE NXT.As seen in the video below, Sarray was being interviewed by Samantha Irvin when Dolin, the former Priscilla Kelly, interrupted and issued a challenge.

“So, Toni Storm doesn’t think you’re quite on her level, but I think you’re a hell of a competitor, and oooh, I’ve been yearning for some competition to finally give NXT a taste of Gigi Dolin, and I think it would be a pleasure to step in the ring with you.”

Sarray then accepted the match. Dolin said she’d go talk with NXT General Manager William Regal, and then walked off to end the segment.

The video was actually recorded after last week’s NXT Great American Bash episode. Earlier in the night, Toni Storm was interviewed in a backstage segment where she dismissed Sarray’s comments from the week before, where she said she wanted a match with Storm. As reported before, WWE revealed during Friday’ SmackDown, via new vignette, that Storm is headed to the blue brand. It looks like her mini-feud with Sarray will not be happening.