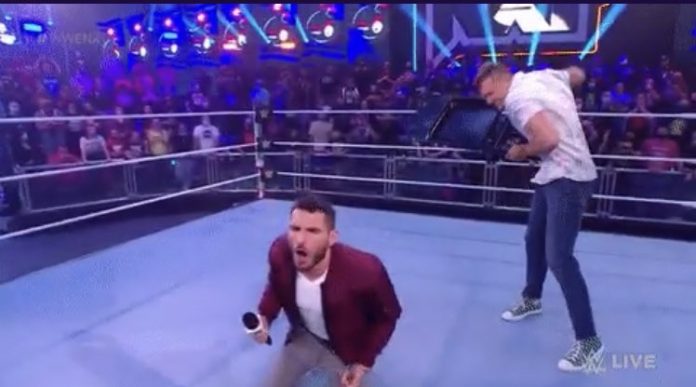 Johnny Gargano looks to be staying in WWE NXT. Tonight’s post-WarGames edition of NXT 2.0 saw Gargano come to the ring to address the crowd amid rumors of his departure. The announcers had teased that Gargano would be announcing future plans, and it was implied more than once that he may be leaving the company. Candice LeRae, and their dog, was even brought to NXT for a brief backstage segment where they kissed before Gargano went to the ring.

The announcers had not earlier how Gargano was being given as much time as he needed with his promo, and Gargano joked about this when he entered the ring. Gargano received chants of “please don’t go!” from the crowd, and talked about how his one regret from these six years in NXT was not enjoying everything more because he was always worried if his match or promo was good enough. He went on about how William Regal, and the fans cheering his name, got him the job with NXT after he was told he’d never be in NXT after his first tryout. He also talked about how he can’t thank the fans enough for helping him live his dream, and how the ring is the only place he’s felt sure of himself in his whole life. Gargano also said he’s spent so much time in NXT because he loves and believes in the place. The crowd praised Gargano with “we love you!” and more “Johnny Gargano!” chants as he talked about NXT being family, name-dropping people like Triple H, Shawn Michaels, Steve Corino, Matt Bloom, Sara Amato, Jeremy Borash, and many others.

Gargano continued the promo and said NXT is his family, which will never change, and he knows change is scary, but sometimes it needs to happen. Fans chanted “no!” at this point as Gargano left the fans with the one message he wanted to – you will never fail is you bet on yourself. Gargano finally addressed his future, noting that he’s still not sure what his immediate future holds, but things are still up in the air. He added that he “may do some things here and there” but he knows one thing for sure – he starts the most important job in his life this February when he and LeRae welcome their first child together, a baby boy. That’s when Grayson Waller showed up and attacked from behind, laying Gargano out with a steel chair.

Waller instantly received huge heat from the crowd as he stood over the former NXT Champion and talked trash. Fans chanted “asshole!” as Waller sent Gargano to the floor, wrapped a chair around his neck, and then spiked Gargano, and the chair, into the steel ring steps. Waller then cleared the announce table and sent Gargano crashing through it with a powerbomb. Waller talked some trash into the camera and then down in Gargano’s face. The WWE Performance Center crowd then chanted “piece of shit!” while a smiling Waller stood over Gargano as NXT went off the air.

There’s no word yet on if Gargano has re-signed with WWE, or if his contract status really is still up in the air. As we’ve noted, Gargano’s original contract expired last Friday, December 3, but he signed a one-week extension to work WarGames this past Sunday. That contract will expire this Friday, December 10. We do know WWE has made a strong contract offer to Gargano, which would keep him with the company for a few years, but it remains to be seen if he has signed. LeRae’s WWE will reportedly expire in May 2022, but it’s believed that the company will add at least a period of time to the contract to cover the hiatus she’s been on since announcing her pregnancy back in August, which could put her under contract into 2023. There has been no update on if LeRae is looking to sign a new deal.

Stay tuned for more on Gargano’s WWE status, and the feud with Waller. Below are related shots from tonight’s NXT 2.0 episode, including Instagram photos of Vic Joseph checking on his good friend after the attack, and Waller yelling at Joseph:

"'Heartbreak' told me I can go as long as I want." 🙌💔#WWENXT @JohnnyGargano pic.twitter.com/2erXlMOtqH