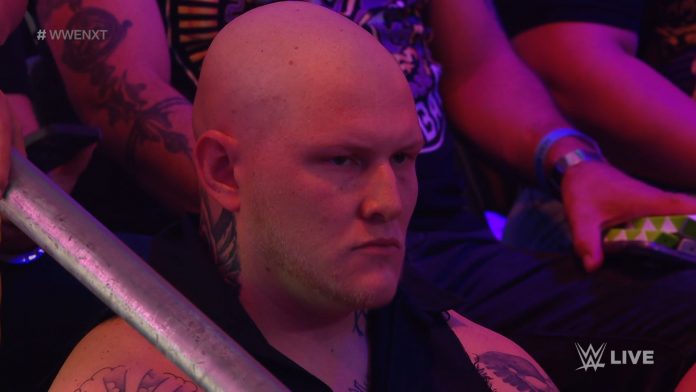 Harland has attacked WWE NXT Champion Tommaso Ciampa. As noted, Parker Boudreaux made his first NXT 2.0 appearance last week, with a new bald look, staring down Joe Gacy from the crowd. Tonight’s NXT show opened with Gacy taking on Ciampa in a non-title match with Gacy earning a spot in the Halloween Havoc NXT Title match between Bron Breakker and Ciampa if he won.

Harland was shown on camera watching Ciampa vs. Gacy a few times tonight. The match ended with Ciampa winning clean in the middle of the ring, but after the bout he stood at ringside but was attacked out of nowhere by Harland. The big man floored Ciampa and held him down by the throat. Gacy ran over to check on Ciampa but Harland also grabbed him by the throat.

Harland, who received “who are you?” chants at one point, then stared at Gacy while holding him away by the throat, until Gacy began to slowly caress Harland’s face. A disturbed Harland let go and ran away, allowing Gacy to move towards Ciampa to check on him. Ciampa shoved Gacy away and went to the back, leaving Gacy looking up from the ground with a crazy smile on his face.

There’s no word on where WWE is going with the storyline between Harland and Gacy, but it will be interesting to see what happens next, and if Ciampa remains involved.