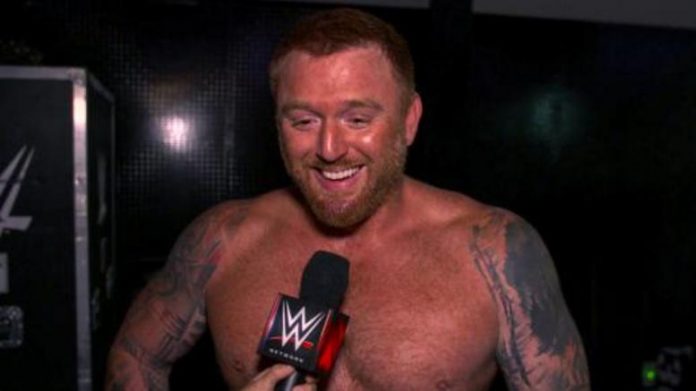 As noted, this week’s WWE RAW saw Heath Slater return to the company. He was brought out by Dolph Ziggler to confront former 3MB partner, WWE Champion Drew McIntyre. Slater talked about McIntyre not being there for him after his WWE release, and then demanded a match. McIntyre won the squash match and then saved Slater from a post-match attack by Ziggler. The segment ended with McIntyre and Slater standing tall together and embracing. Above is post-show video of Slater talking with Sarah Schreiber backstage at the WWE Performance Center. Slater said this RAW appearance as a nice way to close his WWE chapter. Schreiber asked him where his head is at after the appearance.

“It’s knocked silly right now, being honest,” Slater joked. “But it was just something that had to be done. You know, me and Drew, we go way back. He is a brother of mine and he promised me something, you know, and I wanted it, so I confronted him and thank God it happened, but then again, you know, he’s the man, he’s the champ, he’s my best friend. A brother inside and outside the ring. Pretty sure he still loves me after he helped me up he gave me a hug. I hope anyway because he’s a bad dude. But no, this was a nice closing of a chapter. So let’s see what the future brings for me.”

McIntyre tweeted after the show and commented on the angle. “Heath is my brother, something I now realize you never were Dolph. I took pity on you at first, but after that stunt tonight I’m going to severely hurt you. Extreme Rules can’t come soon enough,” he wrote.

Slater also tweeted and wrote, “I love you all. Thank you my friend my brother @DMcIntyreWWE”

McIntyre responded to that tweet with a heart emoji.

Slater was released from his WWE contract back on April 15 as a part of the company-wide cuts brought on by COVID-19. He is technically still under contract to the company until his 90-day non-compete clause expires on July 15. He has been rumored to make his Impact Wrestling debut on July 18 at the Slammiversary pay-per-view, possibly reuniting with Rhyno.

Heath is my brother, something I now realize you never were Dolph. I took pity on you at first, but after that stunt tonight I'm going to severely hurt you. Extreme Rules can't come soon enough pic.twitter.com/nYtNmggUiX