You can check out some highlights from this week’s Impact Wrestling broadcast below:

– It’s a heavyweight collision in the first round of the No. 1 Contenders Tournament as TNA original Hernandez clashes with the maniacal Madman Fulton!

– Smiley Kylie Rae looks to continue rolling in the Knockouts Division as she goes to WAR with the debuting Tasha Steelz!

– Kimber Lee and Havok have history that dates back to before their time in IMPACT, and they renew hostilities in Kimber Lee’s SHOCKING debut match!

– Rohit Raju is taking his first round matchup in the No. 1 Contenders Tournament as the opportunity of a lifetime, but Trey has other plans for “The Desi Hit Man”!

– The North vowed to defend their Tag Team Championships against Canada’s best, but Ethan Page isn’t lining up the stiffest competition, and Josh Alexander isn’t impressed!

– Moose has proclaimed himself “TNA World Heavyweight Champion” and he puts the title on the line against high-flying TNA original SUICIDE! 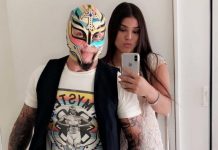