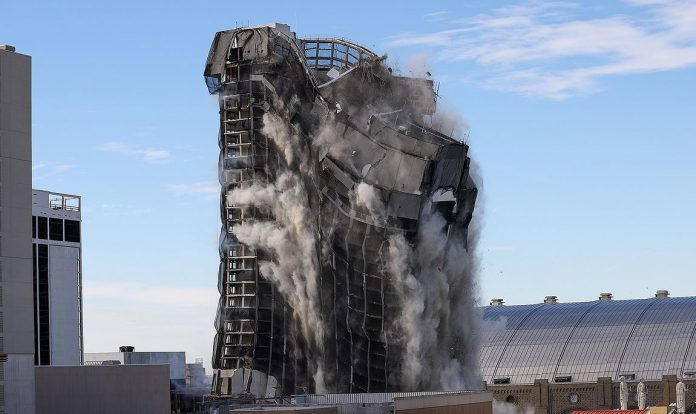 Trump Plaza in Atlantic City, New Jersey imploded today by the city. The casino operated for more than 30 years before closing in 2014. Celebrity WWE Hall of Famer and 45th President of the United States Donald Trump had not been affiliated with the building since 2009. The building opened in 1984.

A series of loud explosions brought the building down around 9am. It took the structure less than 20 second to collapse. You can see video of the demolition below.

Bernie Dillon, the events manager for the casino from 1984 to 1991, name-dropped WWE Hall of Famer Hulk Hogan when talking to WKYC earlier today.

“The way we put Trump Plaza and the city of Atlantic City on the map for the whole world was really incredible,” said Dillon said. “Everyone from Hulk Hogan to Mick Jagger and Keith Richards, it was the whole gamut of personalities. One night before a Tyson fight I stopped dead in my tracks and looked about four rows in as the place was filling up, and there were two guys leaning in close and having a private conversation: Jack Nicholson and Warren Beatty. It was like that a lot: You had Madonna and Sean Penn walking in, Barbra Streisand and Don Johnson, Muhammad Ali would be there, Oprah sitting with Donald ringside/ It was a special time. I’m sorry to see it go.”

The Associated Press has coverage of the building at this link. Below is video of the demolition:

The Trump Casino in Atlantic City was just demolished.pic.twitter.com/KRn6RHTMNg