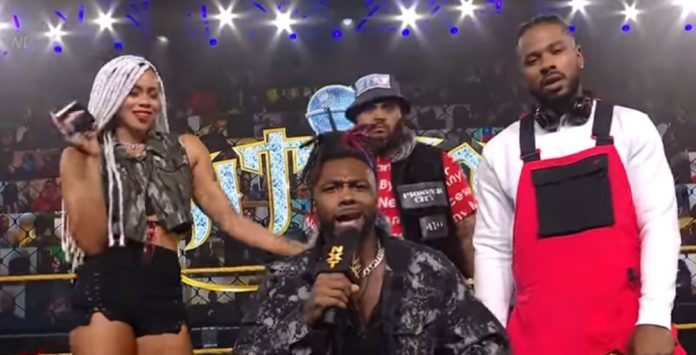 In an update, Swerve brought his new stable to the ring on tonight’s NXT show and revealed that they are called Hit Row, short for Hit Row Records. The segment featured the members of the group rapping their promos. They also revealed their nicknames – “Top Dolla” Francis and “B-Fab” Brandy, in addition to “Swerve” Scott and “Thee” Adonis. Swerve declared that the group is a problem for the rest of NXT, and they make hit together, which is why they are Hit Row.

As noted before, Francis is a former NFL player who is also the host of A&E’s WWE Most Wanted Treasures show. He was signed by WWE in 2020, and was with the NFL from 2013-2018. Formerly known as Tehuti Miles, Adonis played college football and was signed by WWE in December 2018. He has been somewhat of a regular on WWE 205 Live and NXT TV since last fall, and also worked a few SmackDown matches. Brandy was signed by WWE in August 2019 after working a tryout in the summer of 2017. She played multiple sports in high school, but later got into hip-hop and has spent time on tour with names like Soulja Boy, Jadakiss, Kurupt, The Ying Yang Twins, Too $hort and others. She worked a few NXT live events in late 2019 and early 2020, but she’s been out of the ring like others due to the COVID-19 pandemic. Her last match came during the March 7, 2020 NXT live event in Orlando as she and MJ Jenkins took a loss to Shotzi Blackheart and Kacy Catanzaro.

WWE filed to trademark the “Hit Row Records” name on May 6. The following use description was included with the USPTO (United States Patent & Trademark Office) filing:

This is HIT ROW, and if you didn't know, now you know. #WWENXT pic.twitter.com/rLhUwKIosm

“Seems like we the topic of discussion” #WWENXT pic.twitter.com/zUISHtCrgB

“And if you didn’t know, now you know” #HitRow 🎤 #WWENXT pic.twitter.com/Oatge6RCJd