– WWE posted this video of Alyse Ashton interviewing AJ Styles after tonight’s WWE Clash of Champions go-home edition of SmackDown on FOX. As noted, the show featured an Intercontinental Title Ascension Ceremony for Sunday’s Triple Threat Ladder match with former champion Styles, relinquished champion Sami Zayn, and current champion Jeff Hardy. Tonight’s show also featured a non-title Triple Threat that Styles won. The post-match segment saw Styles retrieve both titles from above the ring and pose with them. WWE also announced that now Hardy’s belt and Zayn’s belt will hang above the ring on Sunday, and the winner will be declared the Undisputed Intercontinental Champion.

In the video below, Hardy promises he will be champion once again at Clash of Champions.

“I don’t think I’m going to become Intercontinental Champion, I know I will be Intercontinental Champion,” AJ said to Alyse. “That’s why I have these belts. Really? Can Jeff Hardy beat me? Can Sami Zayn beat me? Now that I have weapons, because a ladder is a weapon, is it not? Just like Jeff likes to use weapons, and Sami… well he’s in no condition to come back from being on such a long vacation, he’s in no condition to come back, and besides, he was stripped of this championship. He’s a nothing, he’s a nobody. I will be champion again.”

Ashton then asked AJ what makes him so confident that he will beat two opponents. “It’s in the name – Phenomenal,” AJ responded. 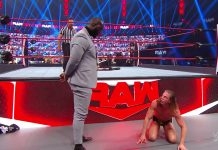