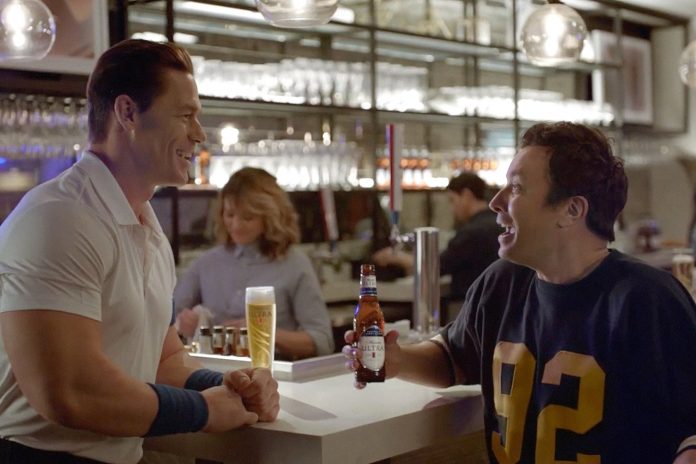 The commercial, which also co-stars Jimmy Fallon, can be seen above and includes appearances by several celebrities.

There’s no word yet on what Cena is making for the Michelob ad, but it’s likely a large amount as is the norm with commercial for the NFL’s Super Bowl events. Heineken paid Brad Pitt more than $4 million their 2005 commercial, while WWE Hall of Famer Arnold Schwarzenegger was paid $3 million for his 2014 Bud Light commercial. Brands are reportedly paying $5.6 million for 30-second commercials. This new ad with Cena apparently runs for one minute and would’ve cost more than $10 million, according to reports. That is just the cost of the advertising time, not including talent or productions costs.

Cena and Fallon People Magazine about the new ad, which is a part of the “#DoItForTheCheers” campaign from the beer company. The tagline for the ad is, “Working out becomes a whole lot of fun when you see the lighter side. #DoItForTheCheers”

The NFL’s Super Bowl LIV takes place on February 2 from Hard Rock Stadium in Miami, and will air live on FOX. The Kansas City Chiefs will be going up against the San Francisco 49ers. There’s no word yet on at what point the commercial with Cena will air.

“It’s a lot of laughing,” Fallon said of working with Cena, as they both agree that they are alike but seem to be polar opposites. “There’s good chemistry between us, so it’s always a ton of fun.”

Cena also commented on being in his first major Super Bowl ad with Fallon.

The focus of the ad is in line with something Cena believes many people misunderstand about incorporating exercise into their lives – the fact that they can work out and enjoy social activities, like spending time with friends at a bar, without feeling guilty.

“Fitness should be fun, it should be something you love,” Cena said. “It betters the quality of your life and extends your life and you can do it and still be a normal person. You don’t have to be this dedicated robot that eats, sleeps and breathes life in the gym.”

Cena and Fallon also agree that “fun” is something they can’t live without and they hope to show others that they can find it in things they may not expect, through this ad.

The NFL’s Super Bowl LIV takes place on February 2 from Hard Rock Stadium in Miami, and will air live on FOX. The Kansas City Chiefs will be going up against the San Francisco 49ers. There’s no word yet on at what point the commercial with Cena will air.