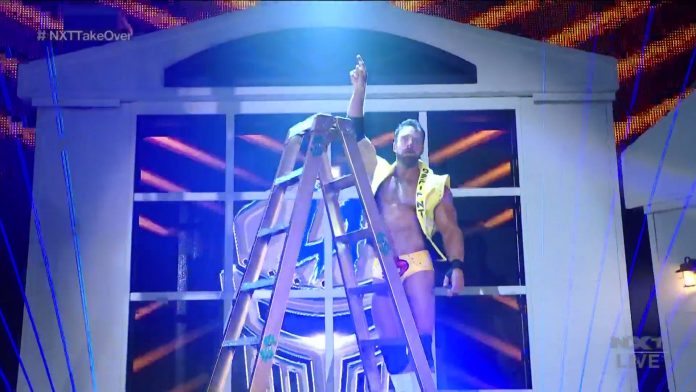 Tonight’s WWE NXT “Takeover: In Your House” event saw LA Knight win a Ladder Match over Cameron Grimes, to win the Million Dollar Championship. WWE Hall of Famer “The Million Dollar Man” Ted DiBiase Sr. was at ringside for the match, and presented Knight with the strap.

Stay tuned for more on what WWE has planned for the Million Dollar Title in NXT. Below are several shots of tonight’s Ladder Match from the Capitol Wrestling Center at the WWE Performance Center in Orlando, Florida:

.@LAKnightWWE looks to go all the way to the TOP in tonight's Million Dollar Title #LadderMatch, streaming LIVE on @peacockTV in the U.S. and @WWENetwork everywhere else! 👆 #NXTTakeOver pic.twitter.com/UVCTMeRV4N

Your anger fuels him. #NXTTakeOver pic.twitter.com/KJT6nm08I3

.@LAKnightWWE said he was going to the top, and he did JUST THAT, as he grabs the MILLION DOLLAR CHAMPIONSHIP! 💲 💲 💲 #NXTTakeOver @MDMTedDiBiase pic.twitter.com/cL32w734Qf

Go big or go to the moon.

The Capitol Wrestling Center may not be happy about it, but @MDMTedDiBiase can't help but smile, and laugh, over the NEW #MillionDollarChampion @LAKnightWWE! #AndNew #NXTTakeOver pic.twitter.com/MLOZGOmXbD