Lio Rush has signed with AEW.

Last night’s AEW Dynamite featured a promo with Rush revealing that he has talked with AEW boss Tony Khan, who wanted him to be All Elite. Rush went on to talk about how he’s a business man and he’s bringing all of his skills to AEW.

AEW later announced that Rush is officially All Elite.

Rush, who has worked with numerous promotions since leaving WWE, made his AEW debut back at Double Or Nothing in May, competing in the Casino Battle Royale. He then announced that he was retiring from pro wrestling, but now he is back and in AEW.

Stay tuned for more on Rush. You can see his promo and AEW’s announcement below:

The Man of the Hour @TheLionelGreen is bringing his big business style to #AEW! pic.twitter.com/i6H0DwKRPM 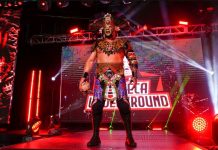