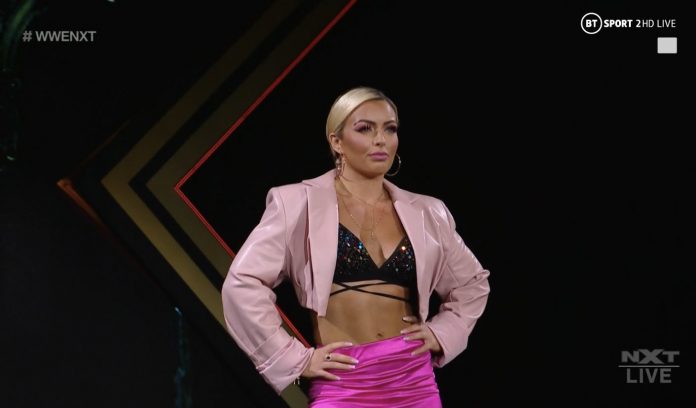 WWE RAW Superstar Mandy Rose has made her return to WWE NXT. Tonight’s NXT saw Rose come to the stage during the singles match between Sarray and Gigi Dolin. Both competitors stopped and stared at Rose before continuing the match, which Sarray won. After the bell, an impressed Rose immediately turned and left to the backstage area.

There’s no word yet on why Rose has come back to NXT, if this is a permanent move to the brand from the main roster, and if her two segments will be related moving forward in the storylines. It seemed like the two were unrelated, but that has not been confirmed.

It looks like Rose may be back for another run with the brand as announcer Vic Joseph noted in a post-show tweet that she is back in NXT. WWE also posted a clip to Instagram, seen below, where Rose says she’s back. Furthermore, Rose re-tweeted a photo from her appearance and added, “I’m backkkk [happy woman raising hand emoji x 4]”

Rose made two more post-show tweets that may provide some insight into her return to NXT. She responded with the “thinking emoji” when WWE tweeted that she was impressed with the match. She then posted an image from a backstage photo shoot she did while at NXT, and wrote, “[eye emoji] @WWENXT [star-struck emoji]”

As seen in the post-show video below, Samantha Irvin interviewed Sarray after the win over Dolin and asked for her thoughts. Sarray said she was so happy and wants more matches. She then spoke some in Japanese and ended the video by waving hello to Rose. Rose re-tweeted the video and wrote, “Aw ur so cute ! Hii! [waving hand emoji x 2]”

Another post-show video, seen below, has McKenzie Mitchell stopping Rose for comments on her return. Rose was asked why she has returned. “You’ll see,” she responded.

Rose originally worked NXT from late 2015 through November 2017. She has been teaming with Dana Brooke on the RAW brand since September 2020. They have been feuding with WWE Women’s Tag Team Champions Natalya and Tamina Snuka as of late, but have not received a title shot. The latest segment between the two teams aired during this week’s taped RAW. The two teams had words once again with Rose and Brooke looking forward to winning the titles. The segment ended after Snuka shoved Brooke but Rose held Brooke back as the champs walked away. Brooke has not commented on Rose’s NXT return as of this writing.

We agree with the CWC, you DO deserve this moment, @WWE_Aliyah. #WWENXT pic.twitter.com/fwcm6MSAjb

Nice to meet you @WWE_MandyRose https://t.co/NlOTNG8hnu