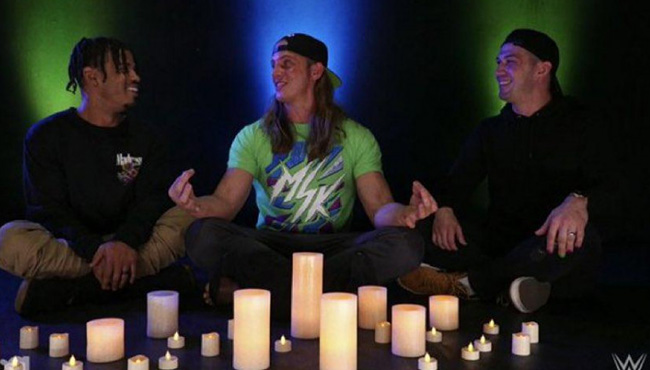 RAW Tag Team Champions Riddle has been revealed as “The Shaman” for MSK’s Wes Lee and Nash Carter. MSK have been on a journey to find their shaman ever since they dropped the WWE NXT Tag Team Titles to Imperium at Halloween Havoc in late October. The big reveal took place during tonight’s NXT show and the man behind the smoke was none of other than Riddle, who was jokingly speculated on by some fans in the last week, but not taken serious by most.

Riddle and MSK sat around several candles as Riddle asked what’s on their mind. MSK talked about expecting to be at the bottom of the NXT Totem Pole when they arrived, but then they quickly found success, and are now worried if they have already peaked. They also wondered if they should change. Riddle responded with words of encouragement, and said they do not need to change as they should be MSK all day, and all night. Riddle declared that MSK will climb the mountain again, together, and that he will be there every step of the way. This surprised MSK, who asked if Riddle will be leaving them. Riddle responded with “no” and asked what was in the bag MSK brought. The bag was opened up, and Riddle was impressed with what he saw, but the contents of the bag (weed?) were never shown to the camera. The segment ended with Riddle, Lee and Carter yelling out “Bro!” while looking down into the bag

It was indicated that Riddle will be in a new stable with MSK, or at least with them in some sort of managerial role. It remains to be seen if MSK will be with Riddle and Randy Orton on RAW, or if Riddle will keep appearing on NXT with MSK.

Orton and Riddle are scheduled to defend their titles in the next few weeks against the winners of the first-ever RK-Bro-Nament. This week’s RAW saw the tournament begin with The Street Profits defeating AJ Styles and Omos, while Rey Mysterio and Dominik Mysterio defeated Alpha Academy. Next Monday’s RAW will feature The Street Profits vs. The Mysterios, with the winners becoming the new #1 contenders to Orton and Riddle. The title match is expected to take place on the December 20 RAW or December 27 RAW, or at the WWE Day 1 pay-per-view on New Year’s Day. The Orton – Riddle storyline is not expected to end any time soon. There’s no word on what WWE has planned for Riddle and MSK, but we will keep you updated.

LMFAO. Matt Riddle as The Shaman for MSK is actually great.#WWENXT pic.twitter.com/WLKfjK1gbs