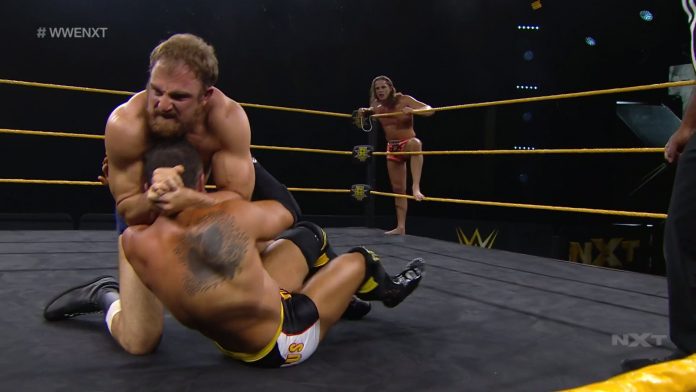 As noted before, Timothy Thatcher made his surprise WWE NXT debut on last night’s show as Matt Riddle’s mystery partner for the successful NXT Tag Team Titles defense over Roderick Strong and Bobby Fish in the main event. The storyline was that Riddle’s partner Pete Dunne, who is stuck in the UK and unable to defend due to the coronavirus, picked Thatcher to be Riddle’s partner for the match. The finish saw Thatcher make Strong tap out to the Fujiwara armbar.

In the video above, Thatcher turns down the title from Riddle, but promises to keep teaming with him to defend those titles until Dunne is back. McKenzie Mitchell interviewed Riddle and Thatcher after the match. She asked Riddle how surprised he was that Dunne picked Thatcher to be his partner.

“Well, to be honest I’ve been pretty sad without Pete. I miss his beautiful smile,” Riddle joked. “I don’t want to get into that, but when I heard he had announced Tim as my partner, it couldn’t have been any better, and a stallion like Tim came out, stepped up, and not only did he step up, he tapped out Roderick Strong and made sure that we remained the NXT Tag Team Champions. I just wanted to say thank you and I think ‘Stallion Pete’ would agree, I think you deserve this.”

Thatcher responded with a show of respect, but said Riddle can keep possession of both titles.

“I appreciate that very much Mr. Riddle, very much,” Thatcher said. “I know how tough of a fighter you are. We might’ve shared a ring a couple times and I’m very grateful to be your partner, as goofy as you can be from some time. But I understand those titles are yours and Pete’s. Now he can’t be here so I’ll happily team with you and defend the titles as long as Pete’s not here. When he gets back maybe we’ll sort some stuff out, but until then, you hold onto that title, sir.”

Riddle said he respects Thatcher’s decision, calling it a “Stallion Move” and declaring Thatcher to be a “beautiful man” as well. Riddle joked that Thatcher isn’t “Stallion Pete Beautiful,” adding that this isn’t a knock, just that Dunne is a 10 and Thatcher is like a 9.5 on the scale. Riddle said he has nothing but respect for Thatcher and wishes nothing but the best for them as a team. Once again Riddle tried to talk Thatcher into a fist bump, but Thatcher wouldn’t. Thatcher did give Riddle a show of respect and said he’s alright before walking off.